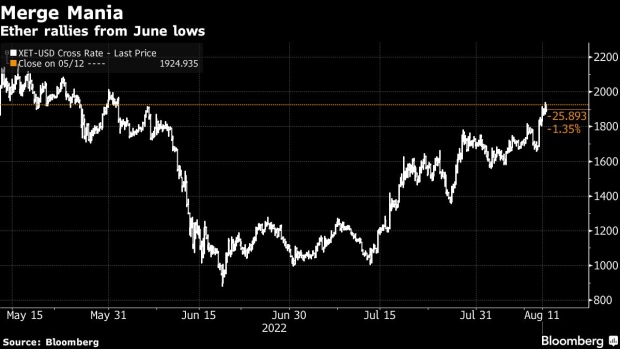 (Bloomberg) -- The most ambitious upgrade to the Ethereum blockchain should take place in September, possibly closer to the middle of the month, developers working on the project said during a conference call after what was billed as a final dress rehearsal.

Developers have picked a number of so-called total terminal difficulty required of the final block mined in Ethereum before the network switches to new software. Figuring out the exact date range when the upgrade will occur will require complex calculations, and will be a moving target, depending on changes to the network’s use and support, developers said on the call that was broadcast over YouTube on Thursday. The final date range is expected to be approved during another developer call next week, though the software engineers are currently looking at Sept. 16 to Sept. 20.

Called the Merge, the software upgrade has been in the works for years, and it will change the way Ethereum orders transactions to become more energy efficient. Instead of using energy-guzzling computers called miners, the network will deploy so-called validators using staked Ether tokens -- a setup called proof of stake.

Following years of delays, the time for the Merge is finally being set after Wednesday’s completion of the Goerli merge test, which simulated the Merge on a smaller scale. A few problems popped up during the test, developers reported on the call. Goerli merge, which many celebrated with parties broadcast on YouTube, was the final test before the actual Merge was to take place.

Ether has rallied more than 60% since a dip in June on anticipation of the Merge getting closer. The native cryptocurrency of the Ethereum blockchain rose as much as 5.4% to $1,941 on Thursday, the highest level in two months. It traded at a record of more than $4,800 in November.

Thousands of projects and millions of investors are depending on the Merge to go smoothly. The blockchain is home to more than 3,400 active decentralized apps, allowing for everything from gaming to trading. Ethereum holds 58% of the $69 billion in total value locked in decentralized finance, which are apps allowing for trading, lending and borrowing, according to tracker DeFi Llama.