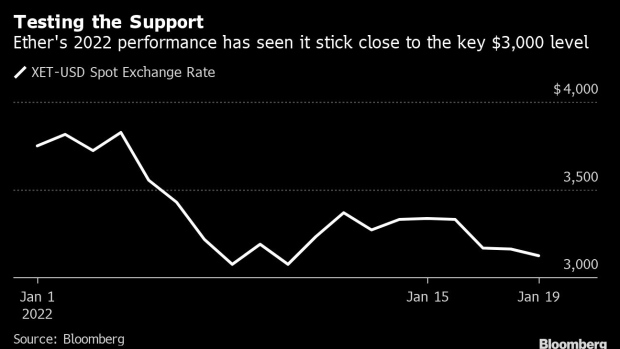 (Bloomberg) -- Ethereum is starting to test the closely watched $3,000 price threshold as the broader drop in risk appetite in some of the more speculative areas of markets continues to weigh on some of last year’s best performing assets.

The second largest cryptocurrency by market value after Bitcoin fell for a fourth day Wednesday, dropping as much as 3.7% to $3,048, according to data compiled by Bloomberg. The last time that Ether, as the native currency of the Ethereum blockchain is known, slid below $3,000 was on Jan. 10. The token surged about 400% last year, compared with a gain of 60% for Bitcoin. Ether is down about 15% in January.

Other digital assets were similarly hit by investors’ weakening sentiment. As of 2:10 p.m. in London, Bitcoin was down around 0.6% lower to $42,149. Smaller digital assets known as altcoins were also affected, with Cardano’s ADA token and Solana’s SOL falling as much as 10.1% and 3.7% respectively, according to pricing data from CoinGecko.

The ongoing slump in crypto prices far below their all-time highs are likely the result of investor sensitivity to speculation around potential interest rate rises and the tightening of monetary policy, according to Susannah Streeter, senior markets analyst at U.K.-based brokerage Hargreaves Lansdown.

“The recent falls may drive more crypto fans into the market in expectation of a steep recovery to come,” Streeter said by email from London. “There is a chance that if investors do pile in, Ether could shoot back up to recent highs, but as we’ve seen with its rollercoaster ride so far, it’s unlikely to stay there for long.”

This month a spike in popularity for Cardano saw its ADA token jump as much as 30% in a seven-day period last week, ahead the launch of a new decentralized crypto exchange on its blockchain. Once the third-biggest cryptocurrency behind Bitcoin and Ether, the crypto-asset has since been rocked by the asset class’ trademark volatility. It is now down 53% from its early-September all-time high of $3.09.

Walid Koumani, market analyst at financial brokerage XTB, said in an email that traders are now awaiting “a catalyst” that could send Ether below the key $3,000 psychological level, among other crypto-assets.

“We are now seeing the effect of weakness in equities spill over to the crypto market,” said Marcus Sotiriou, analyst at UK-based digital asset broker GlobalBlock. “I expect this drop to be short-lived due to $40-41,000 being a key region of support for Bitcoin, after significant sell pressure in recent weeks.”

The crypto industry faced several regulatory pushbacks in recent days, as scepticism toward the rapid growth of digital assets spreads across the globe. Earlier on Wednesday, a top official at the European Securities and Markets Authority called for a bloc-wide ban on Bitcoin mining, citing the negative impact of the proof of work model it uses on the environment.

The U.K. this week said it intends to toughen its oversight of crypto advertising. The Financial Conduct Authority later proposed to restrict crypto-asset marketing to only target “restricted, high net worth or sophisticated investors”, fearing the risk that extreme price volatility could pose to consumers. Spain’s markets regulator also announced a similar series of strict controls for such campaigns, while the Singaporean financial watchdog said on Monday that crypto firms should refrain from advertising to the public.

“This could go two ways in terms of price: greater regulation may give more legitimacy to some currencies, but a push of the industry toward stablecoins could unleash a fresh lack of confidence in the long-term prospects for a raft of highly speculative assets.”