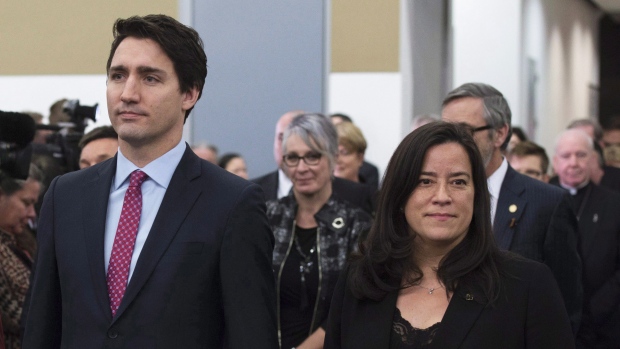 Prime Minister Justin Trudeau and Minister of Justice and Attorney General of Canada Jody Wilson-Raybould take part in the grand entrance as the final report of the Truth and Reconciliation commission is released, Tuesday December 15, 2015 in Ottawa. , THE CANADIAN PRESS/Adrian Wyld

OTTAWA -- Six Liberal MPs will be the ones to decide whether the federal ethics watchdog will speak publicly about his scathing report on how Prime Minister Justin Trudeau handled the SNC-Lavalin affair.

Conservatives and New Democrats pushed for the emergency meeting of the House of Commons ethics committee to be held Wednesday in Ottawa, where MPs will debate whether to dig deeper into the scandal by inviting ethics commissioner Mario Dion to testify.

"Now we have facts," said NDP MP Charlie Angus. "We should be able to ask the man who found those facts to explain them."

The Liberals hold a majority on the 10-member committee. Voting in favour of the motion to invite Dion to appear would mean keeping the SNC-Lavalin (SNC:CT) controversy in the headlines as MPs gear up for the Oct. 21 election.

None of the six Liberals on the committee had agreed to comment by late Tuesday afternoon.

Trudeau, who has defended himself by insisting he was acting in the best interests of Canadians, is now suggesting voters want to move on.

"Voters speak to me about jobs," Trudeau said Tuesday in Trois-Rivieres, Que., when asked whether he is hearing about SNC-Lavalin at his meet-and-greet events. "Yes, people have concerns, but mostly, they speak of the work that we are accomplishing together."

Conservative MP Peter Kent said he hopes his Liberal colleagues, at the very least, support inviting Dion to debrief the committee on his report.

Mary Dawson, the previous ethics commissioner, spent two hours answering questions about her December 2017 report that found Trudeau had violated the Conflict of Interest Act when he and his family when on vacation to a private island in the Bahamas owned by the Aga Khan.

Kent said if the Liberals are concerned about the timing, they could have supported his efforts to investigate the scandal earlier this year.

At the time, Liberal MP Nathaniel Erskine-Smith said it would be "premature" to begin such a probe before the justice committee wrapped up its study.

Erskine-Smith had also pointed out that Dion had begun investigating and that he reports directly to the ethics committee.

The committee should ensure he has what he needs to do his job, rather than do it for him, he argued at an April meeting.

Kent said he wants to ask Dion whether it is time the ethics commissioner's office had stronger investigative powers.

In his report, Dion noted the confidentiality rules that govern cabinet documents and discussions prevented him from accessing everything he needed.

The Prime Minister's Office had partially waived those obligations to allow Wilson-Raybould to testify before the justice committee earlier this year, but Ian Shugart, the clerk of the Privy Council, declined to expand the waiver for Dion.

Kent also said he wants to know whether Dion thinks his reports should have more teeth.

During her January 2018 testimony on the Aga Khan report, Dawson had said the negative publicity would be enough of a consequence.

Trudeau's response to Dion's report has been to take "full responsibility" for what occurred, all the while saying he disagrees with some of Dion's findings. He has also pointedly refused to apologize for what he characterizes as trying to protect Canadians against job losses.

"We have a prime minister without shame, so naming and shaming is obviously less than effective," Kent said.

Conservative Leader Andrew Scheer, who last week urged the six Liberal MPs on the committee "to do what's right," repeated his call for the RCMP to investigate the matter.

"What I'm looking to get out of this is the truth," Scheer said during a pre-campaign event in Toronto.

"We're looking to get the truth for Canadians, so they can understand the lengths that Justin Trudeau went to get a special deal for SNC-Lavalin."