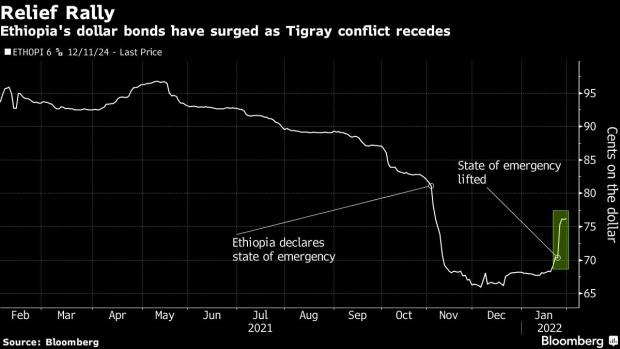 Ethiopia’s bonds are the best-performing sovereign debt in emerging markets this year, after a rally sparked by the government’s decision to end a state of emergency as a 15-month conflict with rebels eases.

The bonds have rallied 6 cents on the dollar since Jan. 26, when Prime Minister Abiy Ahmed’s office said that the security threat had diminished. That brings returns this year to 13%, the best performance out of 80 developing nations tracked by Bloomberg. Last year, the securities lost 28%, the worst performance after El Salvador.

Ethiopia’s government declared a nationwide state of emergency in November after clashes between the federal army and the dissident Tigray People’s Liberation Front escalated. The drawn-out fighting had hammered investor confidence in what was once one of the world’s fastest-growing economies and sparked a sell-off in the nation’s bonds.

In recent weeks, the 15-month conflict has shifted in Abiy’s favor, with Tigrayan forces on the retreat and the United Nations saying there is a “demonstrable effort to make peace.” Last week, Fitch Ratings Inc. affirmed Ethiopia’s long-term foreign currency debt rating at CCC.