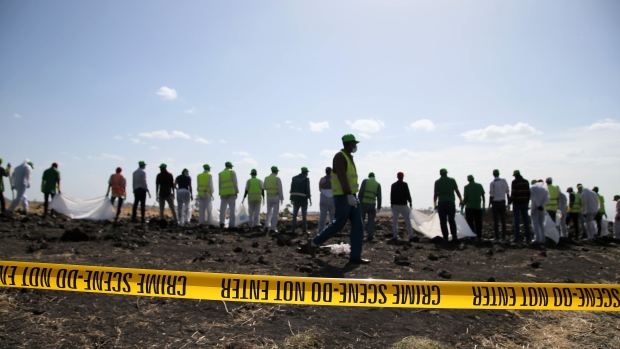 (Bloomberg) -- Ethiopian investigators’ report into the Boeing Co. 737 Max crash outside Addis Ababa in 2019 falsely claimed the jetliner had an electrical failure, the US government said, in a highly unusual public rebuttal of the nation’s findings about the fatal accident.

“The final report does not provide any details to support the EAIB’s statements about the existence of an electrical problem,” the NTSB wrote on Tuesday.

US investigators said they agreed generally with Ethiopia’s findings that a flawed design in the 737 Max pushed the nose down automatically and was at least part of the cause of the March 10, 2019 crash that killed 157 people. It was the second fatal accident involving the model in a matter of months and led to its worldwide grounding, billions of dollars in losses to Boeing and multiple investigations.

But the Ethiopians ignored numerous other factors, the NTSB said. In particular, the Ethiopian Airlines Group crew had been told how to counteract a failure of the flawed software known as Maneuvering Characteristics Augmentation System, or MCAS, after a crash off the coast of Indonesia about four months earlier. But they failed to follow the procedure, the NTSB said.

Amdeye Fenta, chief of the Ethiopian AIB, said the group is preparing a response.

“This is unprecedented in our view,” NTSB Chairwoman Jennifer Homendy said in an interview. “They were not operating in good faith with ICAO rules and we feel that we have to be very public where we think there were inaccuracies in the report and where we think it could be more comprehensive.”

ICAO, or the International Civil Aviation Organization — an arm of the United Nations — oversees the treaty laying out how countries interact in a plane crash investigation. Homendy said she’d instructed her staff to notify ICAO that they believe the treaty was breached by the Ethiopians.

The dissenting opinion comes several weeks after the crash report was released because Ethiopian officials didn’t share it with the NTSB before announcing their findings. That is required under the treaty governing investigations, the US agency said.

The US previously issued a scathing release on Dec. 27 saying the Ethiopian report contained numerous false statements, ignored critical parts of the cause and repeatedly failed to explore safety issues such as pilot training that might prevent such events in the future.

The Ethiopian report said “unexplained electrical and electronic faults” and “production quality defects” triggered the underlying failure that began pushing down the nose.

Yet no evidence of such electronic issues has ever been found and Ethiopian officials were repeatedly told that, the NTSB said.

Instead, the failure was most likely triggered by an impact with a bird just as the plane lifted off, the NTSB said. That and another jet’s impact with a bird at Addis Ababa Bole International Airport raised safety concerns that were ignored, the US said.

Ethiopian investigators didn’t look for bird remains or other evidence of such a collision until eight days after the accident and never bothered to look in the area of the runway where the impact occurred, the NTSB said.

The NTSB also believes that formal recommendations related to crew training should have been included in the report, Lorenda Ward, the agency’s chief of Air Carrier and Space Investigations, said in an interview.

The French Bureau of Investigation and Analysis for Civil Aviation Safety, which also participated in the investigation, also filed comments with the Ethiopians late last month. Among other things, the French accused the Ethiopians of cutting from its transcript of the cockpit recorder comments made by the young copilot showing he was confused.

--With assistance from Fasika Tadesse.