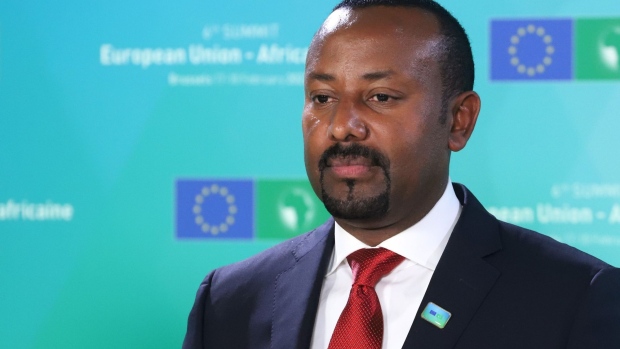 Abiy Ahmed, Ethiopia's prime minister, at the European Union-Africa Union Summit at the EU Council headquarters in Brussels, Belgium, on Thursday, Feb. 17, 2022. Brussels welcomes about 40 African leaders for the first time in eight years, aiming to reset European relations with the continent as it vies with China for influence. , Bloomberg

(Bloomberg) -- The Ethiopian military has begun an offensive against rebels accused of killing civilians in the west of the country last week, Prime Minister Abiy Ahmed said.

About 40 civilians were killed in the Gambella region on June 14, while more than 200 died in the Gimbi area in western Oromia four days later, according to the government, which blames the Gambella Liberation Front and the Oromo Liberation Army for the violence. Ethnic Amharas were targeted in the latter attack.

The offensive against the rebels began this week, Abiy said during a tree-planting event in Addis Ababa, the capital, on Tuesday. Both groups have campaigned for greater regional autonomy and late last year aligned themselves to the Tigray People’s Liberation Front, which fought a war against Abiy’s administration from November 2020 until a truce was declared in March this year.

Read more: The Misery Behind the Truce in Ethiopia’s Civil War: QuickTake

The OLA confirmed in a statement that it had staged an operation together with GLF on June 14 to try and capture armaments from depots in Gambella City and provide safe passage for members of the security forces who were planning to join their ranks. It accused federal police of killing ethnic Oromos and Nuers in the area. The OLA didn’t respond to a text message seeking comment about the Oromia attack.

The US State Department said it was “gravely concerned by reported killings of civilians in the Amhara community” in Oromia and called on all Ethiopians to reject violence and pursue peaceful dialog to resolve their differences. “Continued reports such as these underscore the urgency of ending the ongoing armed conflict in Ethiopia,” it said in a statement.