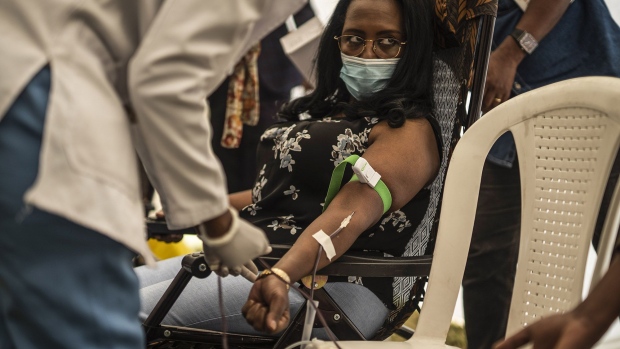 Adanech Abiebie donates blood at the national stadium in the capital on Nov 12, 2020. , Bloomberg

(Bloomberg) -- Hundreds of Ethiopians poured into the national sports stadium in the capital on Thursday to offer their blood and cash to forces fighting a war in the northern Tigray region.

In a campaign spearheaded by Addis Ababa Mayor Adanech Abiebie, Ethiopians — many of them civil servants — queued in the scorching sun to make donations while filling in health forms for the nation’s blood bank. Those gathered in the stands waved Ethiopian flags and applaued as the first group of blood donors took their positions.

Fighting started in Tigray on Nov. 4 after Prime Minister Abiy Ahmed ordered the army to retaliate for an alleged attack by the region’s ruling Tigray People’s Liberation Front on a federal army camp. Hundreds of fighters have been confirmed dead and foreign diplomats say aerial bombing campaigns are ongoing, while busloads of militia fighters from the Amhara region are being sent to fight Tigrayan combattants.

“For a long time the TPLF have done so many terrible things, even in this city,” said Mahlet Worku, 28, an administrative employee at a public health centre in the capital, who had come to donate blood. “If the war is the only way then let it be.”

Thursday’s event was reminiscent of other nationalistic funding drives in Ethiopia, such as a bond-buying program that began under former Prime Minister Meles Zenawi to finance the Grand Ethiopian Renaissance Dam. The project that has generated pride among Ethiopians in the country’s ongoing standoff with Egypt, which opposes the dam’s construction because of the impact it may have on the flow of the Nile River downstream.

“The aim of this blood donation is to express our respect for our army,” Adanech told reporters while giving blood herself. “The attack done by the TPLF on our army is shameful for Ethiopia.”