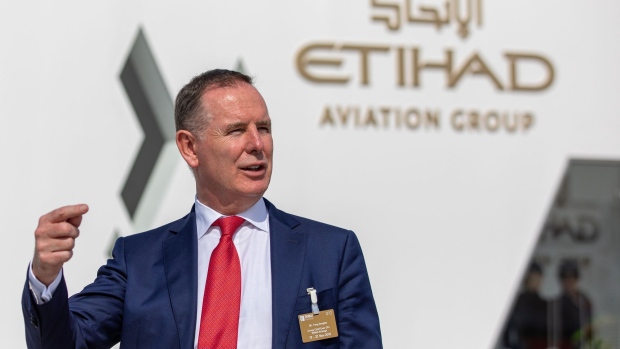 (Bloomberg) -- Etihad Airways said bookings for its India flights are edging higher as the south Asian nation loosens coronavirus curbs, adding to a surge in demand led by the Gulf carrier’s destinations in Europe and North America.

Sales in China are also expected to jump once the latest lockdowns ease, Chief Executive Officer Tony Douglas said Tuesday in an interview at the Global Aerospace Summit in Abu Dhabi, where Etihad is based.

“Everything that gets introduced gets very full very quickly,” he said of the Indian market. “When China comes back online and other parts of the Far East, I will have a go at confidently predicting, they’ll go off like a fire hydrant.”

Etihad’s aircraft are flying 77% full across the network, around 2 percentage points higher than the occupancy level in May 2019, before the pandemic struck. Flights to cities including London, Paris, New York and Geneva are “basically full,” according to Douglas, who said last month that the termination of travel restrictions had lifted sales 800% over 72 hours in some markets.

While India isn’t quite back to normal yet, the subcontinent in general “is pretty solid,” he said. Demand from Japan and Australia, which reopened earlier this year, still has room to catch up with Western Europe and the US.

Etihad will start seasonal flights to Nice on the French Riviera on June 15 and is also operating a summer service to Malaga, southern Spain, and the holiday island of Zanzibar in the Indian Ocean.

After Etihad reported a record first-quarter profit of $290 million before interest, tax, depreciation, and amortization, Douglas said he’s equally positive about the outcome for the first six months.

“We’re fully hoping that by the end of June, first-half results, there’ll be equally strong,” he said, adding that there are so far no signs of the higher cost of crude, and hence fares, denting demand.