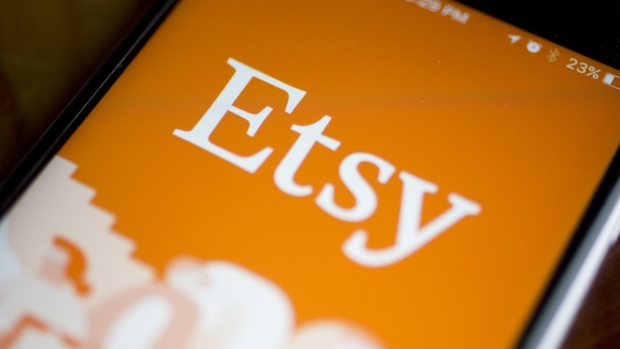 The Etsy Inc. application is displayed for a photograph on an Apple Inc. iPhone in Washington, D.C., U.S., on Friday, Nov. 3, 2017. Etsy is scheduled to release earnings figures on November 6. , Bloomberg

Free shipping has delivered a lot of bulls to Etsy Inc.

Wall Street has warmed up to the e-commerce company of late as the online marketplace’s offer of free shipping on orders of more than $35 and other initiatives are perceived as growth catalysts.

In the latest positive call, KeyBanc Capital wrote that the change should be an important long-term driver of gross merchandise sales as “baskets close to the US$35 free shipping threshold tend to see incremental purchases in an effort to hit the hurdle.”

Etsy rose 2.6 per cent on Thursday.

KeyBanc’s comments were echoed by Canaccord Genuity, which earlier this week wrote that the company’s initiatives were driving “robust growth and improving profitability.” Analyst Maria Ripps called free shipping “an important step in bringing Etsy’s platform closer to par” with other e-commerce leaders like Amazon.com

Not only will free shipping improve “consumer perception around the platform,” but she estimated that it could add upside of 3 per cent-5 per cent upside to 2020 estimates for both revenue and adjusted Ebitda. The company’s Etsy Ads initiative, she added, “should ultimately attract high affinity customers with strong repeat purchase behavior.”

According to data compiled by Bloomberg, consensus estimates for Etsy’s 2020 revenue have risen by about 2.5 per cent over the past three months; the free shipping initiative was announced July 9.

Free shipping and Etsy Ads have also prompted at least two analyst upgrades over the past month, with both RBC Capital Markets and Wedbush specifically citing the initiates as their lifted their ratings to the equivalent of a buy.

Currently, 13 firms recommend buying Etsy, compared with the two analysts who have a hold-equivalent rating on the stock. None of the firms tracked by Bloomberg recommend selling the shares, while the average price target of US$77 implies upside of nearly 40 per cent from current levels.

Shares of Etsy are up more than 16 per cent this year, though the stock is down more than 20 per cent from a record close that was hit in early March.

The next trading catalyst for the stock could come in early November, when the company is expected to report third-quarter results. Wall Street anticipates revenue growth of nearly 30%, according to data compiled by Bloomberg. Gross merchandise sales are seen coming in at US$1.13 billion, which represents year-over-year growth of about 22 per cent, according to a Bloomberg MODL estimate.