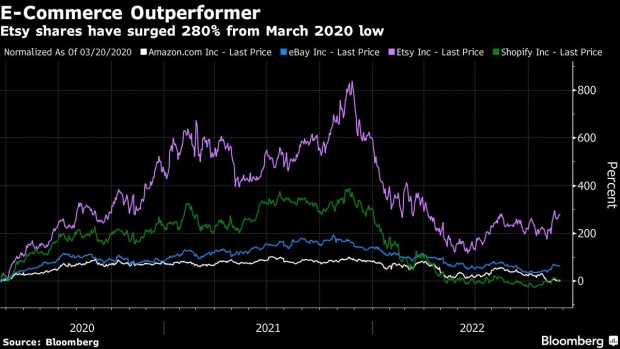 (Bloomberg) -- Etsy Inc. is proving to be something of a breakout star among e-commerce stocks in the second half of the year, as the company’s business model helps it dodge much of the inflation that has pushed up costs at online merchants such as Amazon.com Inc.

Shares of the Brooklyn-based retailer have surged 78% from their 2022 low in mid-June, far outpacing Amazon, Shopify Inc. and EBay Inc. Like most stocks in the industry, Etsy has plunged from the peak set last year, when the pandemic caused a rush into all things e-commerce, yet it’s almost quadrupled from the depths of the coronavirus outbreak in March 2020.

The stock rose 2% on Monday.

Etsy serves as a platform for artisans to sell their wares, meaning the company doesn’t have to spend big on warehouses or inventory as a traditional retailer does. And investors are looking ahead to a pickup in sales growth over the next couple of years.

“The nature of Etsy’s business model has been a large advantage for the company —- especially entering the holiday season,” said Pedro Palandrani, director of research at Global X ETFs.

E-commerce stocks soared to eye-watering valuations during the pandemic as sales surged at an unprecedented rate when billions of home-bound consumers took to online platforms for their retail fix. Now that economies have reopened, the stock-market fallout from the bursting of that bubble has been massive.

At the same time, rising inflation has prompted the Federal Reserve to raise interest rates, causing an investor exodus from high-valuation stocks and a pullback in consumer spending. US retailers showed modest sales growth over Black Friday weekend, using deep discounts to lure shoppers stung by the rising cost of living. Cyber Monday results will paint a fuller picture of demand this holiday season, analysts say.

“Marketplaces like Etsy have an advantage over brands and retailers that own inventory and fulfill their own orders as they can largely bypass the growing inflationary pressures -- from warehousing to shipping,” said Poonam Goyal, an analyst at Bloomberg Intelligence.

Because shoppers don’t go to Etsy for daily essentials, but rather for gift items, the company has benefited from an uptick in parties, weddings and other events this year, Goyal said.

Etsy also has expanded through acquisitions, buying clothing resale site Depop last year, said Palandrani, who also oversees the Global X E-Commerce ETF. Etsy is the second-largest holding in the ETF and by far its best performing component in the second half of the year.

The arts-and-crafts platform also benefited as investors turn their focus to costs at companies. Shoppers on Etsy buy products like handmade custom mugs or personalized Christmas ornaments from artists and sellers, eliminating the company’s need to spend on large warehouses and additional staff to run those facilities for storing inventory from third-party sellers.

“While the market chalked Etsy up as a ‘pandemic play,’ selling items like custom masks during the height of the pandemic, Esty used its buyer and seller base to expand its platform,” said Jane Edmondson, co-founder and CEO at EQM Indexes, the Amplify Online Retail ETF’s index provider. “It is the perfect example of an online retailer that has come out of the pandemic environment stronger and better, far exceeding investor expectations.”

The Nasdaq Golden Dragon China Index of US-listed Chinese stocks is up 20% this month, as of its most recent close, even after a slump of almost 6% last week, and has a chance of recording its biggest-ever monthly gain. Prices may finish the month under pressure, though, given the nationwide protests in China against the Covid Zero policies.