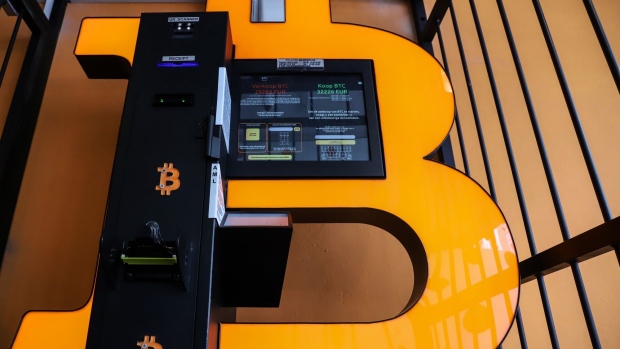 A security cage protects the automated teller machine of a cryptocurrency kiosk in Antwerp, Belgium. , Bloomberg

(Bloomberg) -- The European Union is nearing an agreement on key legislation to regulate the cryptocurrency sector that would set common rules across the 27 member states, people familiar with the matter said.

France, which currently chairs the EU, and the European Parliament are optimistic about resolving remaining issues holding up the Markets in Crypto-Assets (MiCA) package and reaching a deal this month, according to the people. Negotiators are expected to meet on June 14 and June 30.

MiCA, first presented in 2020, will put European regulators at the forefront of supervising cryptocurrencies by creating unified rules across the $17 trillion economy. Addressing issues such as investor protection and crypto’s impact on financial stability has taken on added urgency after last month’s collapse of the TerraUSD algorithmic stablecoin.

Member states and the parliament still disagree on several key aspects of MiCA. According to the people, areas of disagreement include:

Both sides are also discussing how to limit the use of stablecoins as a payment method by introducing a ceiling, in particular for transactions not denominated in euros, the people said, asking not to be identified discussing confidential information.

The parliament is also pushing for factoring in the environmental impact of cryptoassets in the legislation, according to the people. Bitcoin mining relies on using vast computing power to process transactions, which in turn consumes massive amounts of energy.

The French presidency is willing to accept the European Commission’s proposal to disclose the energy consumption of CASPs, according to the people. In addition, members of parliament want the EU executive’s arm to produce technical standards for such disclosures, along with a review clause.

Member states and the parliament are also clashing over the inclusion of anti-money laundering clauses in the MiCA package. National governments consider there to be a separate set of rules for it, while lawmakers want to create a list of CASPs that aren’t compliant with anti-money laundering rules, according to the people.

The French presidency is ready to consider such a list in order to strike a deal, but with a different configuration than what’s been proposed, the people said.