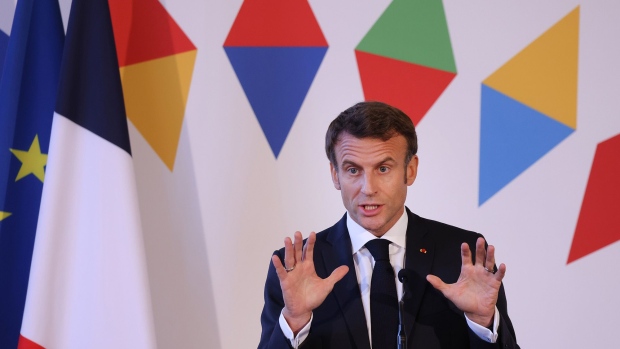 Emmanuel Macron speaks to the media following an informal summit of the leaders of the European Council in Prague on Oct. 7. , Photographer: Sean Gallup/Getty Images

(Bloomberg) -- The European Union’s executive arm is planning to urgently prepare several different options for how to cap the price of natural gas as it tries to alleviate an energy crisis, but EU diplomats warned the bloc’s timetable may be unrealistic.

Leaders aim to agree on specific plans when they meet in Brussels for a summit in just two weeks, French President Emmanuel Macron told reporters. After a meeting of European heads of state in Prague, there’s a growing consensus that measures are needed to tackle rising energy prices, but specifics remain scarce. Several countries warned the EU that it needs to move quickly or jeopardize the bloc’s solidarity as nations are starting go their own way.

European Commission President Ursula von der Leyen said Friday that she will use a letter she wrote to leaders before the meeting as a road map for proposals. The options include negotiating a corridor for “decent prices” with reliable suppliers, a measure to curb prices within the market overall and a way to limit the influence of gas on electricity prices.

“First of all, it is to coordinate the procurement because it needs a common trust and transparency about the offers of gas that we will then purchase together in order to make sure that we do not outbid ourselves on the global market,” von der Leyen said at a news conference. “The second objective is to tame the gas prices.” Those options include a negotiated corridor with suppliers like Norway, as well as limiting the peaks and speculation in the market.

The third option she described was to decouple the role of gas in setting the price of electricity in Europe. “This might be the first step for a far-reaching market reform that we are envisaging, but only toward the beginning of next year because this is a very complex endeavor,” she said.

Several EU diplomats cautioned that the timetable was extremely ambitious and that it would be very difficult for countries to coalesce around specifics in time for the next summit.

“It’s the commission’s task to develop things further,” Belgian Prime Minister Alexander De Croo told reporters. “From what I hear the commission is willing, but I’ll believe it when I see it. And it’s high time that we should see something.”

Von der Leyen proposed the idea of gas price cap back in March and it has taken seven months to get the idea firmly into the frame of discussions. Details of how the radical emergency measure might work are still vague, but von der Leyen said these would be worked out in the coming weeks.

There are concerns that imposing a cap may limit Europe’s ability to attract cargoes of liquefied natural gas from Asia and the US, a key reason that delayed detailed plans so far.

The most detailed outline of how a cap could work involves having a corridor or range around the cap that would allow prices to fluctuate, according to a document seen by Bloomberg News. The price range would be regularly reviewed to reflect the level of other key energy benchmarks such as crude oil, coal and gas prices in North America and Asia.

Imposing a price cap risks making the energy crisis worse, according to the European Federation of Energy Traders.

“The fundamental issue is that there is a shortage of energy,” the group said in a position paper. “If we cap prices, this does not go away and we must ration demand anyway.”

Other measures that are gaining traction include a joint purchasing platform, which would be aimed at boosting the bargaining power of member states buying gas and securing lower prices. Surging electricity costs also need to be tackled with proposals for a limit on the cost of gas used for power generation and a new benchmark linked to LNG costs in Asia.

Tackling cost is just one piece of the puzzle. Lowering prices risk removing the incentive for people to cut consumption exacerbating the crisis even further. Countries have been reluctant to agree to binding targets for reducing energy use.

“We need to start preparing already for next winter, which will be even tougher,” Macron said.

The latest EU discussion come after the bloc has already agreed to impose windfall taxes on energy companies’ profits and to power- and gas-demand reduction goals to contain an unprecedented energy crunch triggered by a cut in supplies from Russia after its invasion of Ukraine.

At the sidelines of the summit, German Chancellor Olaf Scholz -- one of the critics of setting a fixed gas price cap -- pitched a proposal to rein in soaring prices by launching a buyers’ alliance of European and Asian countries.

Under the plan, Germany would use its current presidency of the Group of Seven most industrialized countries to form a global alliance to bring down gas prices not only for EU member states.

“The import prices for gas are way too high,” Scholz told reporters after meeting with other EU leaders. “It is important that we also coordinate with other gas-consuming countries such as South Korea and Japan.”