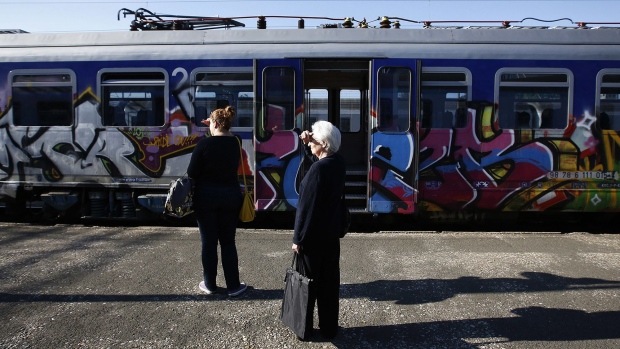 Commuters wait for a train as graffiti-covered railway carriages are seen alongside a platform at the central station in Zagreb, Croatia. , Photographer: Simon Dawson/Bloomberg

EU home affairs ministers agreed at a Thursday meeting in Brussels that Croatia should be allowed to join the so-called Schengen area on Jan. 1. This means the country will no longer be bound by the bloc’s internal border controls, paving the way for easier travel.

Two countries voted against Bulgaria and Romania’s accession bid, according to diplomats familiar with the vote, who asked not to be named because the process is private.

The European Commission, the bloc’s executive arm, has called for all three countries to be added, saying that it would make Europe safer and more prosperous. But the decision requires the support of all EU members that fully apply the Schengen rules as well as the European Parliament.

Romania and Bulgaria have long met the technical criteria to join the Schengen area, but some EU members have expressed reluctance over concerns about the countries’ ability to curb graft and uphold the rule of law.

EU Commissioner Ylva Johansson said she will make it a priority of her mandate to have the two nations taken in as soon as possible, suggesting talks will continue.

The pair joined the EU in 2007 but failed to win a political vote to become members of the Schengen area four years later due to corruption concerns. Now, they are striving to show they can accommodate an influx of refugees from the war in Ukraine while still protecting the EU’s external borders.

Austria earlier said a decision to include the two countries should be delayed until member states comply with rules requiring the registration of asylum seekers. Of 100,000 people detained this year for illegally crossing Austria’s eastern border, 75,000 had already crossed Schengen-area states without a prior registration.

“We need to first markedly improve the system, and then we can integrate these countries,” Interior Minister Gerhard Karner told reporters in Brussels before the meeting.

Their rejection comes even after the European Commission cleared the two members states after a renewed assessment, saying they have fulfilled conditions to enter the visa-free travel regime and should benefit from participation “without any further delay.” Politicians from the two neighboring countries warned that the decision may fuel anti-European sentiment among their citizens.

“To be honest we don’t understand Austria’s inflexible stance,” Romanian Prime Minister Nicolae Ciuca said from Bucharest. “Today’s decision only motivates us to continue. We’ll  have a constructive approach.”

Chancellor Olaf Scholz said later Thursday that Germany will continue to work to ensure that Romania and Bulgaria will achieve the same goal as Croatia.

“Today was a day of decisions - there are more to come, even in a very short time,” he said.