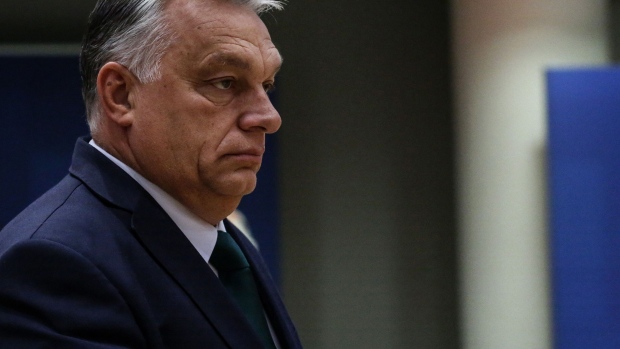 Viktor Orban, Hungary's prime minister, on day two of the European Union (EU) leaders summit at the European Council headquarters in Brussels, Belgium, on Friday, Oct. 21, 2022. The European Union agreed to press ahead with a set of emergency actions to address the bloc’s energy crisis, with Germany yielding to pressure from other member states to pave the way for a temporary price cap on natural gas. , Bloomberg

(Bloomberg) -- The European Commission recommended delaying the disbursement of crucial funding to Hungary, saying Prime Minister Viktor Orban’s government has failed to allay its concerns over graft and the erosion of the rule of law.

The EU’s executive arm said member states should conditionally approve Hungary’s Covid-era recovery plan, but Budapest would first have to comply with a set of reforms before it could receive the €5.8 billion ($6 billion) in grants from the bloc. The interim step, which takes account of Hungary’s recent efforts to pass more than a dozen pieces of anti-corruption legislation, will prevent Budapest from losing access permanently to €4.1 billion of that pot.

Separately, the commission suggested freezing €7.5 billion of funds allocated to Hungary out of the bloc’s budget until it enacts a set of milestones aimed at rooting out graft in the government.

“In short, no funds will flow until the essential milestones are properly implemented,” Commission Vice President Valdis Dombrovskis said Wednesday in a news conference, adding that a later reversal of any milestones would block subsequent payments.

The bloc’s justice commissioner, Didier Reynders, added that the 27 milestones are binding and time-bound. “Let me be clear from the outset: We will be very vigilant in our scrutiny of Hungary implementing these milestones,” he said. “‘There’s no partial payment for partial fulfillment here.”

The EU’s 27 member states had been expected to make a final decision Dec. 6 on the two recommendations, but that timetable could slip. EU member states have until Dec. 19 to act on the suspension.

The forint weakened 0.8% against the euro, the biggest drop among emerging market currencies. It has plunged almost 10% year-to-date as uncertainty over EU funds weighed over Hungarian assets.

The EU measures are an effort to bolster the rule of law in Hungary after Orban appointed loyalists to the courts, the chief prosecutors office and the media authority and, according to the EU, chipped away at democratic standards in the country.

The decisions signal that the EU is no longer taking Orban’s promises for granted after more than a decade during which the renegade Hungarian leader skirted the bloc’s scrutiny while taking its money.

Poland, where the ruling party has mimicked many of Orban’s policies, is also currently unable to access fresh EU funding due to concerns about the independence of judges.

For his part, Orban has more broadly tested the EU’s patience since Russia’s invasion of Ukraine, including in demanding the withdrawal of sanctions against Moscow, forcing an exemption for Hungary from the bloc’s oil embargo, blocking a global corporate tax deal and dragging his feet on bids by Finland and Sweden to join the NATO military alliance.

“There’s nothing new,” Hungary’s EU Funds Minister Tibor Navracsics told reporters on Wednesday, adding that the decision on the funding freeze had already been in effect since September. On the other hand, he said the recommendation to endorse Hungary’s Covid-recovery plan was a “significant step forward.”

Hungary estimates that fresh funds from the Covid-recovery plan and the new multiyear budget period may start flowing in the second quarter of next year, after it meets demands by the end of March to bolster judicial independence, Cabinet Minister Gergely Gulyas said on Nov. 24.

He said altogether €7 billion of EU funds may arrive in 2023, mostly leftovers from the 2014-2020 budget but also including Covid recovery money, as well as a share of the 2021-2027 funding that won’t be held back in any scenario. EU finance ministers are unlikely to change the commission’s funding recommendation, Gulyas added, saying the bloc’s executive arm “has a majority” among member states.

The commission’s moves were largely applauded by European lawmakers, who have been very critical of the Hungarian government.

“Hungary needs the EU’s help -- but we also need guarantees that EU funds get to where they are intended,” said Katalin Cseh, a Hungarian member of the European Parliament. “Viktor Orban wanted to scam Europe with some empty promises, and today’s announcement by the European Commission has shown that he did not succeed.”

--With assistance from Stephanie Bodoni.