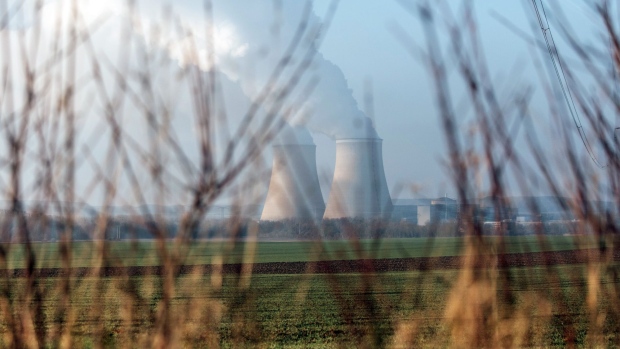 (Bloomberg) -- The European Investment Bank may steer clear of controversial proposals to provide a green label to some gas and nuclear projects, according to its president, Werner Hoyer.

The complexity of proposed rules covering natural gas risks leaving investors “drowsy” and could open the door for potential greenwashing, Hoyer said at the EIB’s annual media conference in Brussels.

Hoyer, who heads up the lending arm of the European Union, suggested that while the EIB would be compliant with the bloc’s green rulebook, known as the taxonomy, it may decide to shun the parts of it that deem some gas and nuclear projects as environmentally-friendly.

“The idea of the taxonomy for a banking institution that needs to borrow 60-100 billion euros ($67 billion-$112 billion) per year on the capital markets is to assure the investor that they get what the label says,” Hoyer said at the event. “If we lose the trust of the investors by selling something as a green project, which turns out to be the opposite, then we cut the feet on which we are standing when it comes to financing the activities of the bank.”

Hoyer’s comments highlight how some major banks and investors could simply choose to opt out of certain elements of the taxonomy, rather than risk accusations of greenwashing. The danger for the EU is that it creates a two-speed model for its environmental finance plans, which it has touted as setting the “gold standard” globally.

The European Commission is expected to adopt by the end of next week draft proposals to carve out a role for gas plants so long as they replace coal, meet certain emissions conditions and have construction permits granted by 2030. Similarly, the bloc plans to allow nuclear facilities so long as they are granted permission before 2045 and meet criteria to avoid significant harm to the environment.

While the plans are likely to pass scrutiny by member states and the bloc’s parliament, they have been widely criticized by a combination of lawmakers, civil society and investors. There is also division within the commission itself, with Johannes Hahn, the bloc’s budget chief saying he will vote against the proposals because they risk making the energy transition last a century.

The EIB’s take is important, given that it is trying to position itself as a climate bank, and has tightened its practices on the funding of both gas and nuclear in recent years. It’s also deeply integrated with the EU’s efforts to support the green transition globally.

“I don’t want to see the word ‘taxonomy’ misunderstood or even discredited,” Hoyer said, adding that the risk was that countries might hide behind the rulebook when actually they don’t want to shift to renewables and energy efficiency.

“The taxonomy might allow you to do certain things, but that doesn’t mean it requires you to do it,” Hoyer said, refering to the potential green-labelling of gas and nuclear projects. “We must be cautious on that side. We are needed as somebody who organizes and supports long-term transitions and not the short-term fix.”