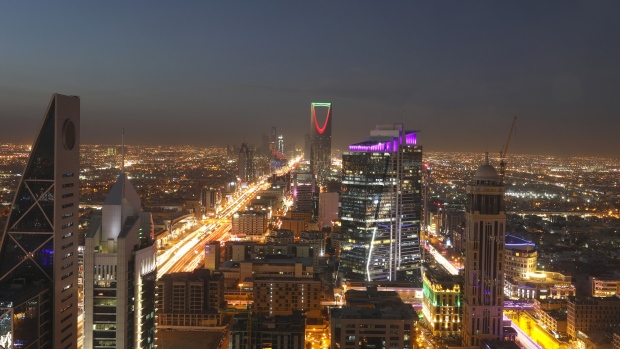 Light trails from automobile traffic traveling along the King Fahd highway, left, and Olaya Street, right, lead towards the Kingdom Tower, center rear, in Riyadh, Saudi Arabia, on Thursday, Dec. 1, 2016. Saudi Arabia is working to reduce the Middle East’s biggest economy’s reliance on oil, which provides three-quarters of government revenue, as part of a plan for the biggest economic shakeup since the country’s founding. , Bloomberg

(Bloomberg) -- Saudi Arabia, Panama and the U.S. Virgin Islands were included on a blacklist adopted by European Union regulators amid efforts to stem the risks of money-laundering and terrorist financing in business deals or transactions.

The European Commission on Wednesday identified 23 countries as posing a higher risk for illicit financial flows, adding hurdles for banks in Europe in the future when dealing with clients from countries in these nations.

“We have established the strongest anti-money laundering standards in the world, but we have to make sure that dirty money from other countries does not find its way to our financial system,” EU Justice Commissioner Vera Jourova said in a statement. “Dirty money is the lifeblood of organized crime and terrorism.”

The EU move follows a string of money-laundering cases involving some of the bloc’s biggest banks, highlighting shortcomings in the EU’s framework. Danske Bank A/S is at the heart of a dirty money scandal involving suspicious funds that flowed from Russia and elsewhere through its Estonian unit.

“This is an invitation to address your weaknesses and my doors remain open,” Jourova told journalists in Strasbourg, France, adding that the list is not set in stone and will be adapted as countries included address the EU regulator’s concerns. “My aim is not to list countries for the sake of listing them.”

As a result of the list, “banks and other entities covered by EU anti-money laundering rules will be required to apply increased checks (due diligence) on financial operations involving customers and financial institutions from these high-risk third countries to better identify any suspicious money flows,” the commission said.

It’s the first time the commission has drawn up a list based on its own methodology, targeting more countries than an existing version that largely builds on analysis by the Financial Action Task Force, a global watchdog. A country is added if “strategic deficiencies” in its anti-money laundering framework are identified, for example in relation to record keeping and the reporting of suspicious transactions.

--With assistance from Alexander Weber.

To contact the reporter on this story: Stephanie Bodoni in Brussels at sbodoni@bloomberg.net

To contact the editors responsible for this story: Anthony Aarons at aaarons@bloomberg.net, Peter Chapman