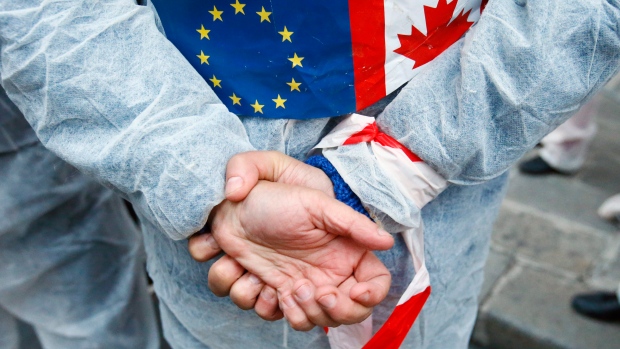 A protester against the EU trade deal with Canada, known as CETA , AP Photo/Francois Mori

BRUSSELS - A planned EU-Canada free-trade deal moved closer to reality on Tuesday after a key committee advised the European Parliament to give its backing after months of protests and heated debate.

The EU-Canada Comprehensive Economic and Trade Agreement (CETA) is seen as a test of Europe's ability to forge future trade accords and as a counterweight to anticipated protectionism under new U.S. president Donald Trump.

"It's more than just a free-trade treaty with Canada. It's a statement about how we relate with the rest of the world," said Sorin Moisa, CETA coordinator for the center-left S&D group, whose members have been divided over the pact.

"We want to shape rather than withdraw from the world, and all the more so after Trump," he told Reuters in an interview.

CETA still needs approval from the European Parliament to enter into force and lawmakers in its international trade committee voted 25-15 urging it to do so. The full parliament is due to give its verdict in mid-February.

In a debate on Monday, committee members backing the accord repeatedly warned of the threat of greater protectionism under Trump, who has withdrawn from the Trans-Pacific Partnership and plans to renegotiate the North American Free Trade Agreement with Canada and Mexico.

"We have an important friend and ally who seems to be at least partly disengaging from the international scene, promoting less trade, more protectionism," she said of the United States.

The EU and Canada concluded negotiations more than two years ago and eventually signed the treaty in October, but only after opposition from a region of Belgium.

Even if the 751-seat European Parliament votes for CETA, it would only enter force provisionally, most likely in March or April in the form of import tariff removal, as it also awaits approval from the parliaments of the EU's 28 member states and Belgium's regions.

Supporters say CETA will increase Canadian-EU trade by 20 per cent and boost the EU economy by 12 billion euros a year and Canada's by $12 billion.

CETA and the larger planned EU-U.S. Transatlantic Trade and Investment Partnership (TTIP) have proved contentious, drawing criticism from trade unions and protest groups that say it will give more power to multinationals and lead to a race to the bottom in standards.