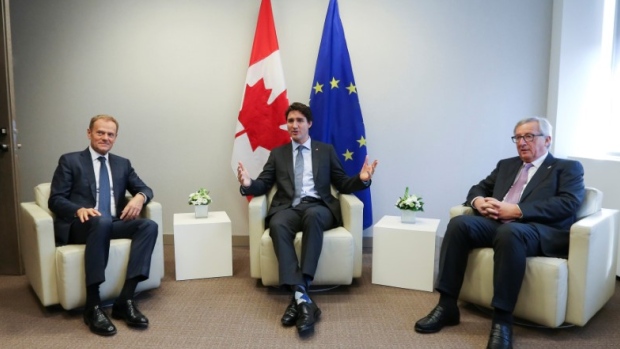 A planned EU-Canada free trade deal received backing from a committee of the European Parliament and Germany's top court on Thursday, increasing its chances of entering force later this year.

The European Union and Canada signed the Comprehensive Economic and Trade Agreement (CETA) in October, but only after opposition from a region of Belgium and hesitation in Austria and other countries.

CETA, along with the larger planned EU-U.S. Transatlantic Trade and Investment Partnership (TTIP), has proved contentious and drawn criticism from trade unions and environmental and other groups.

More than two years since the negotiations concluded, CETA still needs approval from the European Parliament. It is expected to give its verdict in February.

The parliament's environment, public health and food safety committee voted 40 to 24 for a motion saying the 751-seat parliament should back the deal.

Parliament's trade committee is the lead body responsible for CETA, but before it holds a vote in January, other committees are allowed to offer their opinions.

The employment committee recommended in December that the deal be rejected, saying it risked job losses and increased inequality.

Even after the European Parliament vote, CETA would only enter force provisionally, most likely in the form of import tariff removal, as it also needs approval from the parliaments of the EU's 28 member states and Belgium's regions.

Supporters say CETA will increase Canadian-EU trade by 20 per cent and boost the EU economy by 12 billion euros (US$12.8 billion) a year and Canada's by $12 billion.

Germany's Constitutional Court on Thursday rejected emergency attempts by activists to stop Berlin endorsing the accord before ratification by the national parliaments.

In October the Court had given the government the green light to approve CETA, but activists argued that the government had not met the court's requirements.

"With the decision published today the Second Senate of the Constitutional Court has established that the German government has implemented the requirements set by the Court before endorsing the agreements on the signing and initial implementation of CETA," said the Court.

The main focus of protests against CETA is the system to protect a foreign company's investments against state intervention. Critics say its arbitration panels to rule on disputes allow multinational companies to dictate public policy, such as on environmental standards.