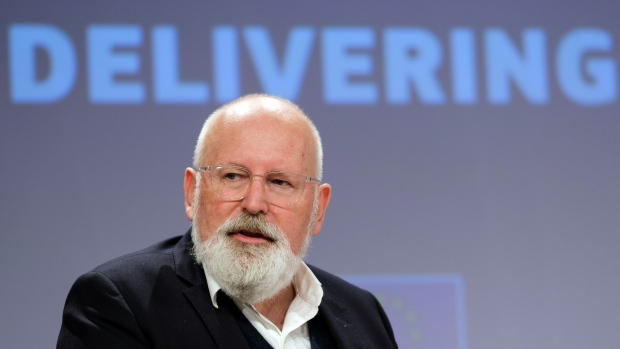 Frans Timmermans, vice president of the European Commission, speaks as the European Union (EU) unveils a landmark climate plan in Brussels, Belgium, on Wednesday, July 14, 2021. The EU is set to transform every corner of its economy -- from how people heat their home to the cars they drive -- as the bloc uses a massive overhaul of rules to position itself as a global leader on climate change. , Bloomberg

(Bloomberg) -- The European Union’s top climate official is set to meet China’s special envoy on climate change in London as the two sides attempt to build momentum ahead of crucial talks aimed at limiting global warming that start later this week.

The meeting on Wednesday between Frans Timmermans and China’s Xie Zhenhua is a warm-up for the United Nations climate conference, known as COP26, in Glasgow starting on Oct. 31. China’s premier Xi Jinping won’t be attending the UN talks in person.

China has yet to announce its revised plan on how it will boost emissions cuts over the next decade, which is seen as a key sticking point for the talks. While the country has pledged an end to financing coal projects overseas, it’s one of the world’s major economies that hasn’t put forward an updated voluntary emissions reduction target -- officially known as a nationally determined contribution, or NDC.

Meanwhile, Group of 20 diplomats have all but given up on their lofty goal of consigning coal to history, with China having ordered miners to dig up as much coal as they can to help alleviate the nation’s energy crunch. The country has said its goal is for carbon emissions to peak before 2030.