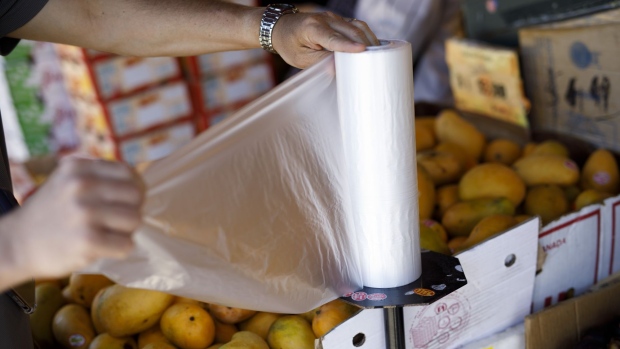 A customer reaches for a plastic bag at a grocery store in Toronto, Ontario, Canada, on Wednesday, June 12, 2019. Justin Trudeau's government announced plans Monday to ban single-use plastics such as straws and plates in Canada. Photographer: Cole Burston/Bloomberg , Bloomberg

(Bloomberg) -- The EU Commission is evaluating a ban on plastic packaging and setting new requirements for manufacturers, EU Commissioner-designate for environment and the oceans Virginijus Sinkevicius said in an interview with German newspaper Die Welt.

“We definitely want to expand the rules for single-use plastics and are currently investigating in which direction it would be possible,” he was quoted as saying. “An important step would be, for example, to ban plastic packaging or to prescribe the use of recycled plastic.”

The new EU regulation on single-use plastics threatens a market in excess of $10 billion, with polypropylene and polystyrene being the plastics most exposed, BloombergNEF estimates. Adopted last year, the Single-Use Plastics Directive bans plastic products such as cutlery, stirrers, straws, cotton bud sticks and some polystyrene containers.

The EU Commission is also investigating how manufacturers of products such as tires or cosmetics could be obliged to dramatically reduce the microplastic of their products.

“Microplastics are on our agenda. By the end of the year, we will provide a very detailed list of all those products that contain microplastics or that use microplastics.” Sinkevicius was quoted as saying.

To contact the reporter on this story: Vanessa Dezem in Frankfurt at vdezem@bloomberg.net

To contact the editors responsible for this story: Reed Landberg at landberg@bloomberg.net, Ian Fisher, James Ludden