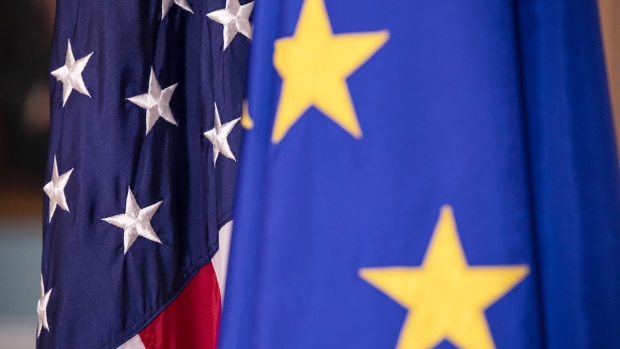 (Bloomberg) -- The European Commission confirmed that the inaugural meeting of a new trade council with the U.S. will go ahead as planned after France sought to have it postponed.

The Trade and Technology Council will meet in Pittsburgh next week, and will focus on “short-term semiconductor issues,” Miriam Garcia Ferrer, a spokesperson for trade and agriculture at the European Commission, said in a tweet Thursday. After in-depth talks at the commission in October, conversations on mid- and longer-term strategic chip issues will begin in TTC working groups to prepare for the next council summit in Europe, she said.

The European Union and the U.S. are cautiously moving to rein in China, seeking stronger enforcement of investment-screening rules and trying to keep technology from being misused to threaten security and human rights, according to a draft of outcomes ahead of the talks.

The document, prepared for the Sept. 29 gathering and seen by Bloomberg, states the nations will cooperate to promote labor rights, combat forced labor, and that they will work together on export controls to protect international security and support a global level-playing field. They will also jointly resist challenges to their trade policies arising from non-market distortive policies, a reference to China. The draft is subject to change.

France sought to have the meeting delayed and gained support from some EU member states to postpone the summit to allow them to assess a new defense pact Washington struck with Australia and the U.K.

The Pittsburgh meeting is aimed at allowing the EU and U.S. to discuss regulatory alignment that would strengthen their joint position with regard to China, which they have accused of human-rights abuses, cyber-espionage and flooding global markets with artificially cheap goods to undermine competitors.

According to the draft document, the TTC establishes 10 working groups in areas where the U.S. and EU plan to strengthen their relationship and cooperation, ranging from technology standards, climate, supply chains and semiconductors, and global trade challenges.

Nations will share information on non-market distortive policies and practices that pose particular challenges for U.S. and EU workers and businesses to develop ways to mitigate the risks, according to the document.