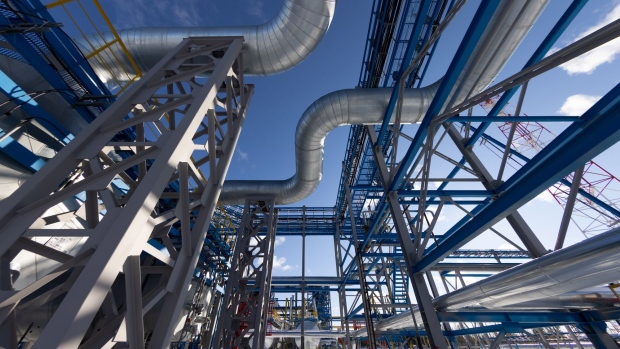 (Bloomberg) -- The European Union could cap natural-gas prices to avoid “unbearably high” costs if Russia, the region’s biggest supplier, significantly limits or cuts off the flow.

The European Commission is mapping out energy-market intervention measures as part of a package to replace Russian gas imports after the invasion of Ukraine. It is set to recommend agreeing on common principles to prepare for a wider disruption and a regional or EU-wide emergency, where gas markets can no longer match supply and demand, according to a draft document seen by Bloomberg News.

Concern over gas supplies are weighing on European energy markets as Moscow retaliates to EU penalties with its own curbs against some gas companies in the region. Uncertainty over how EU-based importers should pay for Russian gas to avoid a breach of sanctions have also been a headache for weeks.

Introducing a maximum regulated price in an emergency would be limited to its duration and the market price should be used as long as possible, the commission said in the draft. The document may still change before the adoption scheduled for May 18.

“One possibility would be to limit price formation during this disruption scenario by capping the price on European gas exchanges, but such a price cap can in general be introduced in different ways and can intervene at different levels of the gas value chain,” the commission said in the document. “If compensation is foreseen, this type of intervention could require excessive public financing.”

The commission is also set to give the green light for short-term measures to cushion consumers and companies from high energy prices. They include:

The measures are meant to be temporary and not apply beyond the beginning of June 2023.