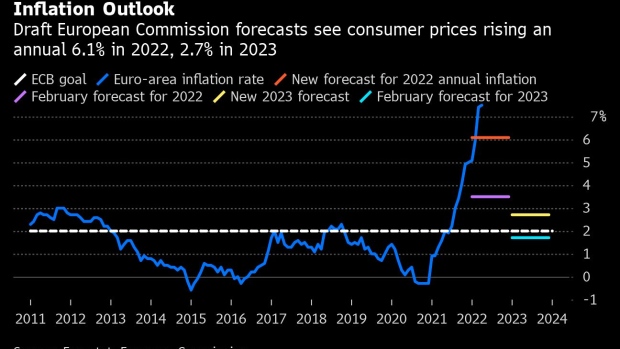 Workers push a pallet loader filled with sacks of carrots inside a distributor in Porto, Portugal. , Bloomberg

The European Union cut its prediction for 2022 euro-area growth and almost doubled its estimate for inflation, according to new draft projections.

In the first forecast since the outbreak of war in Ukraine, the European Commission will say gross domestic product will expand 2.7% in 2022 and 2.3% in 2023, according to a draft seen by Bloomberg. That’s down from February readings of 4% and 2.7%.

On inflation, the commission predicts rates of 6.1% and 2.7% for this year and next, compared with previous forecasts of 3.5% and 1.7%, respectively.

The predictions aren’t finalized and may still change before they are published by the EU executive on Monday.

Russia’s invasion of Ukraine and sanctions imposed in response have darkened the outlook for the global economy by sending energy prices surging and straining supply chains that were already reeling from the pandemic. The euro area is among the worst-hit regions because of its reliance on Russian energy and proximity to the conflict.

The rebound from virus restrictions is now expected to be softer than initially thought, while inflationary pressures are still on the rise. Consumer-price growth hit a fresh record last month -- reaching almost four times the European Central Bank’s 2% target.