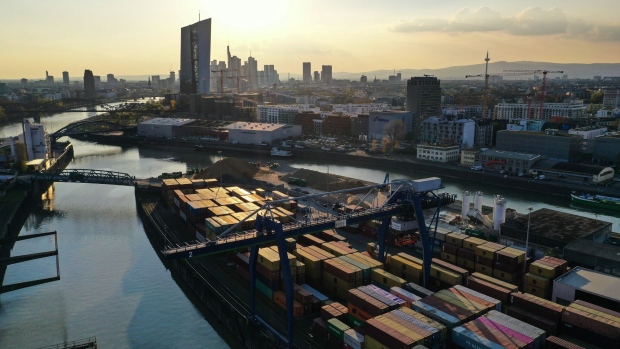 (Bloomberg) -- The EU will require derivatives traders to use accounts at clearing houses in the bloc for some transactions, under plans aimed at boosting Europe’s capital markets.

Certain banks would need to clear a minimum amount of business using active accounts in EU-based clearing houses, according to an EU official speaking on condition of anonymity. The European Commission is expected to outline the measures next month.

The proposed shake-up -- first reported by the Financial Times on Wednesday -- is aimed at reducing the EU’s reliance on the UK’s financial services sector after Brexit. The demands would apply to derivatives, and could include credit swaps and futures.

The European Commission is also expected to speed up plans for authorizing new derivatives products, in order to attract more investors to EU clearing houses.

Meanwhile, UK Prime Minister Rishi Sunak faced pressure from an alliance of business, environmental and worker groups to drop plans to sweep away thousands of EU laws on the UK statute book by the end of 2023.

More than a dozen organizations including the Trades Union Congress and Institute of Directors wrote to Business Secretary Grant Shapps warning the move would cause “significant confusion and disruption for businesses, working people and those seeking to protect the environment.”

TUC General Secretary Frances O’Grady said in an emailed statement that the Retained EU Law Bill -- which would set the repeal of EU laws into motion -- was a “recipe for chaos.”

--With assistance from Julian Harris.