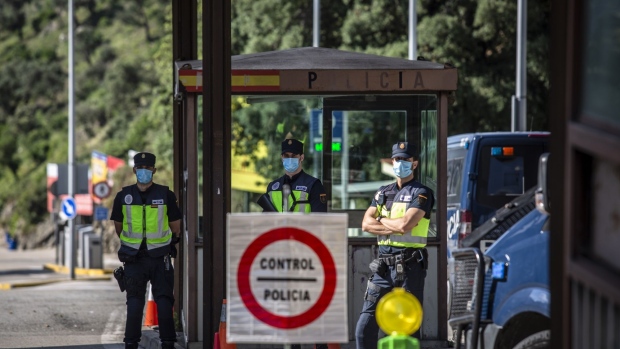 Spanish police officers wait for vehicles crossing into France at the border checkpoint in El Perthus, Spain, on Sunday, June 21, 2020. “The good news is that thanks to how the epidemic has evolved, we’ve been able to move forward the re-opening of our borders,” Spanish Prime Minister Pedro Sanchez said. Photographer: Angel Garcia/Bloomberg , Bloomberg

(Bloomberg) -- European Union diplomats reached a deal on common thresholds for imposing bloc-wide travel curbs, such as requiring a negative Covid-test result or quarantine for visitors, according to a spokesman for the German government in Brussels.

The non-binding guidelines, which ministers will formally sign off on Tuesday, could offer some relief to the continent’s battered airlines and travelers confused by the patchwork of country-by-country measures. Under the plan, restriction-free travel will be allowed between regions with fewer than 25 new coronavirus cases per 100,000 people for the previous 14 days, and with fewer than 4% of virus tests giving positive results.

A color-coded map of the 27 nation-EU -- plus Iceland, Liechtenstein, Norway and Switzerland -- to be updated on a weekly basis, will show “green areas” between which travel is allowed without restrictions. The map will be published by the European Centre for Disease Prevention and Control, based on data provided by national authorities in each state.

That could provide some relief to airlines. Uncoordinated announcements on quarantine requirements for incoming travelers and abrupt bans contributed to a drop in travel, adding to the woes of an industry already pummeled by its worst crisis on record.

European airlines’ hopes for a bounceback have been dashed by rising case counts and a panoply of restrictions in countries such as the U.K., Spain and France. The industry has lobbied fiercely for a coordinated plan for Europe, advocating pre-flight tests to replace quarantines that deter air travel.

The pace of the pullbacks has accelerated. Norwegian Air Shuttle ASA said Friday it’s considering closing down its short-haul base at London Gatwick airport, which serves destinations such as Barcelona and Faro, Portugal, to concentrate on Nordic and transatlantic routes instead. Earlier in the week, larger rival EasyJet Plc said it would stop basing planes in Venice and Naples over coming months because of flagging demand to the Italian cities.

The latest data from ECDC shows that no country, as a whole, in the EU is below the threshold that would allow restrictions-free travel, highlighting how the pandemic is poised to keep the demand subdued in the months ahead. However, the color coding agreed on Friday will be done on regional basis, meaning a flight could be permitted between two regions coded “green” on the map, even if other areas of the country where the flight originated from are coded “red.”

“The common risk analysis and mapping will lead to more predictability and transparency when traveling under COVID conditions in the EU,” the spokesman for the German presidency of the EU said. “This is an important step forward.”