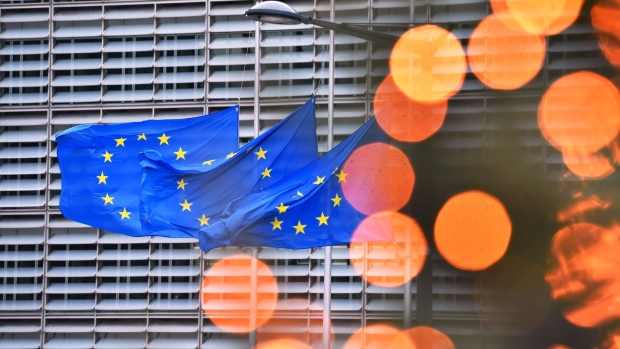 European Union (EU) flags fly at half mast following the death of Valery Giscard d’Estaing, France's former president, near festive decorations outside the Berlaymont building, headquarters of the European Commission, in Brussels, Belgium, on Friday, Dec. 4, 2020. Brexit trade talks that were on the verge of a breakthrough descended into a fight between the U.K. and France on Thursday as the British government said prospects of an imminent deal had receded. , Bloomberg

(Bloomberg) -- The European Union is considering a German proposal to ban EU nationals from holding high-paying roles in Russian state-owned companies, according to people familiar with the matter.

The proposal, if formally presented by the European Commission and backed by all member states, would cast a wide net over EU nationals. As a result, it would likely scoop up former German Chancellor Gerhard Schroeder, said the people who declined to be named on confidential talks.

Schroeder is the chairman of the shareholders’ committee of Nord Stream AG, a joint project to transport Russian gas via pipeline which is majority-owned by the energy giant Gazprom PJSC, according to German media.

The measure does not name specific individuals. It would be up to national governments to enforce the restriction.

The proposals were put forward before Gazprom announced Tuesday that the Nord Stream pipeline had been damaged near Danish waters. Germany and others have said they suspect sabotage. Gazprom has significantly cut supplies to the EU citing technical problems. The Nord Stream 2 pipeline project was halted after Russia invaded Ukraine earlier this year.

Schroeder quit in May his post as chairman of Russian state-owned oil company Rosneft PJSC after three months of widespread calls for him to cut ties to Russian President Vladimir Putin over the war in Ukraine.

A Social Democrat like current Chancellor Olaf Scholz, Schroeder led the ruling coalition with the Greens from 1998 to 2005. He has become an embarrassment for his party after refusing to distance himself from Putin and give up lucrative jobs with Russian state-owned energy companies.

The proposed ban would include a phase-in period, one of the people said.

Other former EU leaders, including Finland’s Esko Aho and Austria’s Christian Kern, as well as former French Prime Minister Francois Fillon, stood down from the boards of several Russian companies after the invasion of Ukraine.