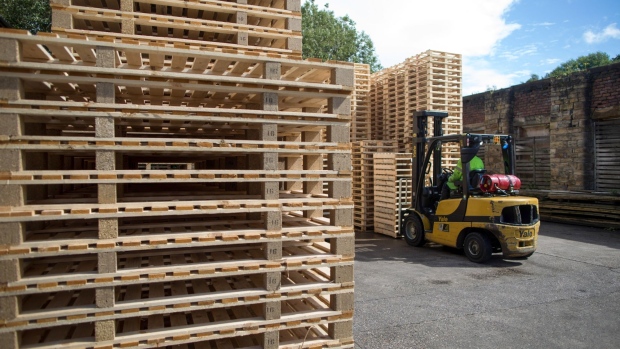 An employee uses a forklift truck to move a stack of non heat treated wooden pallets at Shaw Pallet Ltd. in Huddersfield, U.K., on Tuesday, Aug. 25, 2020. From January, wooden pallets moving goods between the U.K. and EU will need to comply with ISPM-15 -- an international rule that requires them to be baked to 56 degrees Celsius for at least 30 minutes to prevent the spread of pests and diseases. Photographer: Chris Ratcliffe/Bloomberg , Bloomberg

(Bloomberg) -- The impact of the European Union’s sanctions on its own economy has so far been largely contained to a few specific sectors, according to an assessment prepared by the bloc’s executive arm.

The restrictive measures have caused supply issues in sectors like wood and precious metals, but wider disruptions have mostly been because of global market trends, Russia’s war in Ukraine and Moscow’s own retaliatory steps, according to a person familiar with the analysis.

The impact assessment, which was requested by member states, comes as EU nations are discussing proposals for a ninth package of sanctions, which would target Russia’s access to drones and impose further restrictions on investments, banks and technology exports.

The bloc has tried to tailor its sanctions to punish Moscow more than its own member states. Hungary, which has resisted some of the EU’s efforts to sanction specific targets, has blamed the bloc’s sanctions for its economic woes but the analysis suggests the criticism is overstated.

As of the end of November, the EU has approved more than 150 national measures to mitigate the shock of Russia’s invasion against Ukraine as part of a temporary crisis framework that allows flexibility within state aid rules, according to the person, who asked for anonymity because the document hasn’t been publicly released. The measures add up to €525.5 billion ($554 billion), according to the assessment.

The EU has tried to clarify or even amend its sanctions to make sure they don’t affect food exports from Russia, or constrain its oil sales too severely.

Before Russia’s invasion, the EU’s economy had been expected to expand significantly, largely returning to pre-pandemic output levels. Instead, the war has led to higher prices and supply-chain disruptions, and put a strain on public finances as governments try to mitigate the impact of soaring energy costs.

The spike in energy prices has been particularly severe in the EU compared to the US and Japan, posing challenges to competitiveness and resulting in reduced production at several plants. Measures introduced by member states to limit the impact of high energy prices on households and companies are estimated to have a net budgetary cost of 0.9% of the EU’s gross domestic product in 2022, according to the assessment.

Following a political push to phase out Europe’s dependence on Russia and a ban on its seaborne crude, imports of gas and oil from Moscow have decreased significantly and are currently around one-third of the levels seen at the beginning of the year, the assessment found. A transition period for a ban on seaborne oil, together with exemptions for crude delivered via pipeline, have allowed market players to secure sufficient alternatives for now, tackle infrastructure bottlenecks and upgrade refineries.

Continued supply disruptions of Russian gas could however worsen the outlook for inflation and economic activity, according to the assessment. Supplies along several routes have already been cut.

Although the EU’s GDP expanded in the first half of this year, the bloc’s annual inflation rate hit 11.5% in October and growth has been uneven across the bloc with some nations recording low or negative rates. Consumer confidence is at record lows and a recession cannot be ruled out, according to the person.

The EU’s export restrictions have been designed to minimize the impact on supply chains. Imports from Russia have fallen to about 9% of total inbound trade from 40%-45% before the war, with key imports replaced by countries such as Turkey, Brazil, South Korea and India.

Still, a ban on wood has contributed to price increases and some supply issues persist for plywood and oak, the assessment found.

Some products are in short supply because of the war and measures taken by Moscow rather than as a consequence of sanctions. Imports of rare gases, such as neon and xenon, which are needed to produce chips have collapsed.

Hits to critical raw materials — which are not sanctioned — have so far been mostly avoided. Imports are up for aluminum, nickel and titanium, and slightly down for palladium and copper, the assessment showed.

Oil Price Cap Is No Gamechanger for Putin’s Wartime Budget

One vulnerability the war in Ukraine exposed is the EU’s reliance on Russia’s railways and corridors for freight traffic with China, according to the analysis. The issue is likely to impact transport costs and comes on top of challenges with air freight, as well as shipping difficulties at mainly Chinese ports.

The price of food and agricultural products, which for several items were rising before the war, have started to fall, thanks in part to the Black Sea grain initiative and the establishment of so-called solidarity lanes, according to the assessment.