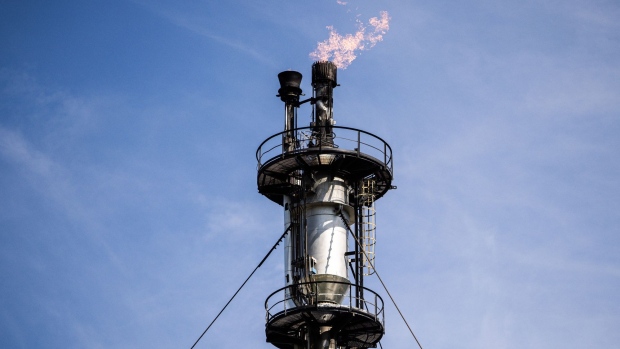 A flare stack burns waste gases at the Duna oil refinery, operated by MOL Hungarian Oil & Gas Plc, in Szazhalombatta, Hungary, on Thursday, May 26, 2022. Hungarian Prime Minister Viktor Orban said there was no consensus among European Union leaders on banning Russian oil but signaled he was ready to agree if the bloc guarantees his country still receives the fuel via a pipeline and other measures in case that avenue is disrupted. Photographer: Akos Stiller/Bloomberg , Bloomberg

(Bloomberg) -- The European Union suggested changes to its 20-billion-euros ($20.97 billion) plan to finance a shift away from Russian fossil fuels, seeking to alleviate member states’ concerns over the way funds from a carbon market-based tool will be distributed.

France, the holder of the EU’s rotating presidency, proposed on Thursday a new method of assigning to countries revenues from extra sales of emissions permits. The move comes after a group of governments strongly opposed the original allocation key used in a post-pandemic recovery fund. The new proposal accounts for inflation, which shot up across the continent after the Russian invasion of Ukraine aggravated an energy crisis, according to a document seen by Bloomberg News.

The move disappointed some member states who are calling for a design that would better reflect nations’ dependence on Russian energy supplies, according to two people familiar with the matter. Instead, an indicator reflecting the impact of the current crisis on production costs in the economy will be used, France said in the document shared with EU governments.

“Using a more ‘micro’ indicator such as the relative rate of dependency on oil and gas in each member state was not retained because it did not capture the full effect of the current crisis,” the document said.

Some member states are also concerned about the impact of the EU plan on the integrity of the EU Emissions Trading System, according to the document. The proposal by the European Commission last month assumes selling about 10% of permits currently withheld from circulation and held in a special reserve. Releasing them into the market would temporarily boost supply and lower emissions prices.

The announcement of the plan triggered a drop in carbon prices as investors criticized the EU for a lack of political predictability and potentially weakening the carbon-market reserve, a supply-control mechanism that helped drive emissions costs to record levels earlier this year.

The MSR started operating in 2019 by withholding from circulation a share of certificates to alleviate a glut that weighed on pollution prices. At the end of last year, it held 2.6 billion EU emission allowances. Under the proposal the reserve would still function to reduce surplus carbon allowances and bolster market resilience, according to the Commission.

The regulation on the MSR would be amended to enable releasing permits through the end of 2026, until auction proceeds reach 20 billion euros. The sales will be carried out by the European Investment Bank.