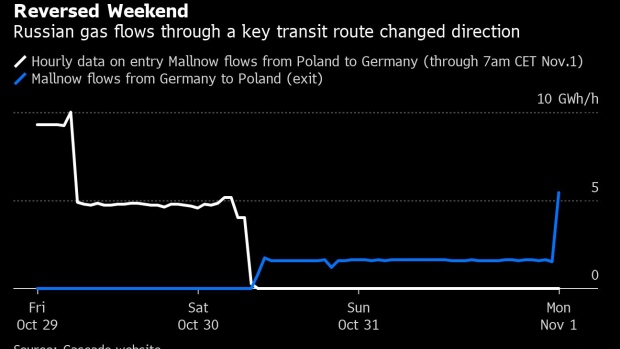 European gas prices surged after Russian flows into Germany via a key transit pipeline dropped to zero and reversed direction over the weekend.

Russian natural gas shipments entering Germany’s Mallnow compressor station dropped to zero on Saturday, according to data from grid operator Gascade. The Yamal-Europe pipeline was instead sending gas eastward from Germany to Poland, and those flows increased further early on Monday.

Shipments through Yamal-Europe pipeline, one of several routes Gazprom PJSC uses to deliver fuel to the region, were already expected to be capped this month after the Russian gas giant only booked 35% of the monthly capacity offered at Mallnow. The reverse flows, however, left traders scratching their heads after Russian President Vladimir Putin signaled a potential increase in supplies that sent prices tumbling last week.

“Gas prices are currently all about signals and especially those being sent from Russia,” said Ole Hansen, head of commodity strategy at Saxo Bank A/S. “While the weekend developments are not unusual, it sends the absolute wrong signal to a market that tanked last week on a promise from Putin.”

Gazprom said on Saturday that it was meeting demand from its European customers in full, and “fluctuations in demand for Russian gas depend on the actual needs of buyers.” Poland was still receiving some Russian gas at the Kondrakti compressor station, albeit at a slower rate.

The reverse flows suggest Poland, which is trying to renegotiate its long-term gas contract with Russia, is ordering more gas from the west. That’s leaving less supplies for Germany, which also receives its fuel via a Baltic Sea pipeline from Russia. Poland’s PGNiG, which last week requested a price revision in its contract with Gazprom from Nov. 1, didn’t respond to calls and emails seeking comments.

The Polish network operator Gaz-System said on Sunday that there was no demand for gas transit toward Germany. Gascade said reverse flows are not unusual and that they’ve happened before. There are also signs that Russian gas flows into Slovakia are set to drop.

Russian gas shipments through Yamal-Europe have been far below capacity in recent weeks. That’s prompted accusations from some European officials that the country is withholding supply to pressure the region into accelerating approvals for its controversial new pipeline, Nord Stream 2.

“We have no official view on Russian flows for the rest of the winter and it is absolutely the jolly joker now,” said Gyorgy Vargha, chief executive officer at gas trader MET International. “They have a high influence over the market.”

Putin has repeatedly signaled Russia will increase flows to Europe, but that’s yet to happen. Putin has ordered Gazprom to start filling its storage sites in Europe after Nov. 8, when domestic facilities will be full.

Traders will be watching closely for any signs Russia will actually top up shipments this heating season. In Tuesday, auctions for pipeline capacity to move Russian gas via Ukraine and Poland will provide clues as to whether Gazprom intends to boost supplies in the first three quarters of 2022.

The jump in gas prices also fueled a rally in electricity prices as cooler weather outlook for parts of Europe added to low to moderate wind and solar generation potential. German power for first quarter had its biggest gain in two weeks, with growing uncertainty of fuel availability for fleet of gas plants during the coldest winter months.

The jump in gas prices is set boost coal burning, with a measure of power-plant profitability favoring the dirtiest of fossil fuels for all of next year. Anticipating increased demand, benchmark European prices for coal and carbon also rose on Monday.