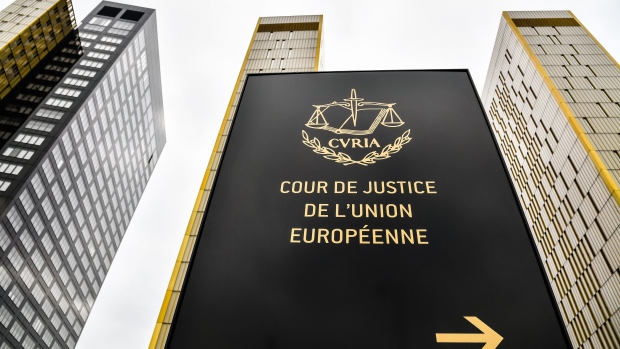 (Bloomberg) -- The European Union’s threat to hit renegade nations Poland and Hungary in the pocket for backsliding on democratic standards got a boost after an adviser to the bloc’s top court backed the legality of the crackdown.

The EU had the right to award itself new powers to withhold budget distributions from nations backsliding on the rule of law, Advocate General Manuel Campos Sanchez-Bordona of the EU Court of Justice said in a non-binding opinion on Thursday.

Poland and Hungary should lose their court challenges to the so-called conditionality mechanism because the EU acted “on an appropriate legal basis,” he said.

The EU has been battling the populist regimes in Warsaw and Budapest for months amid mounting concerns over issues such as the erosion of judicial independence and LGBTQ rights. The European Commission, the bloc’s executive arm, last month took the first informal step toward triggering the conditionality mechanism, demanding answers to accusations that funds provided by the bloc could have been subjected to corruption or fraud.

The EU hinted for weeks it may wield the new tool to withhold payments from its budget, as well as from a 750 billion-euro ($849 billion) pandemic recovery package. The commission’s concerns over the situation in the two nations have already convinced it to withhold approval of Poland’s and Hungary’s recovery plans, which is needed to unlock stimulus funds from the pandemic package.

If the two countries were to miss out on the stimulus funds -- either by the commission not approving their plans or because of the conditionality mechanism -- Poland would forfeit some 36 billion euros in recovery money and Hungary 7.2 billion euros.

“Poland shouldn’t let itself be blackmailed,” Deputy Justice Minister Sebastian Kaleta said by phone. “It’s absolutely clear that the conditionality mechanism breaks the EU laws because it can lead into arbitrary decisions by Brussels bureaucrats to withhold funds from members states.”

“It clearly flies in the face of EU unanimity rules and is part of an attempt by Brussels and Berlin to attempt a change of government in Poland,” said Kaleta.

The EU has backtracked on plans to trigger the mechanism formally ahead of the ruling by the bloc’s top court. While Thursday’s opinion won’t bind judges making the final decision, the court often follows the advice of its advocates general. A ruling is expected early next year.

EU Bankrolled Eastern Rebellion That Threatens to Tear It Apart

Poland and Hungary are the only two EU states subject to a so-called Article 7 procedure, which could lead to the suspension of their EU voting rights.

Poland’s simmering feud with the EU almost reached boiling point in October when the nation’s top tribunal ruled that some EU laws are incompatible with the country’s constitution, undermining a cornerstone of EU membership.

Hungary’s government has also decided to ask its Constitutional Court to review an EU court ruling related to migration, which the EU’s Justice Commissioner Didier Reynders said was “unacceptable.”

The EU’s top court in October slapped Poland with a record daily fine of 1 million euros for failing to dismantle a controversial regime for disciplining judges, seen by critics as a way to oust those who don’t back the populist Law & Justice party.