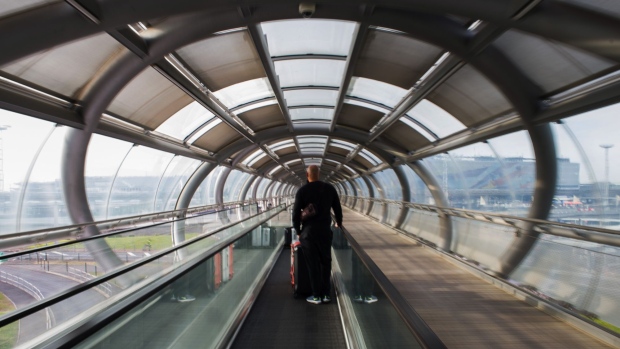 A solitary traveler on a moving walkway towards Terminal 4 at Orly Airport, operated by Aeroports de Paris. , Bloomberg

The “Digital Green Certificates” will offer proof that holders have had a Covid-19 jab or recently returned a negative test, while people who contract the disease should be recognized as immune from day 11 for about six months, according to a draft of the rules due to be discussed at a meeting in Brussels.

EU states have been at loggerheads over the passes and the privileges they should convey, and envoys must reach a common position before negotiations with EU lawmakers can begin. The talks come after Johnson & Johnson delayed the European rollout of its vaccine Tuesday pending a review of rare blood clots, dealing a blow to hopes that widespread travel could resume by June.

“While the pace of European vaccination has doubled so far in April, compared with that in March, it will have to triple to save part of the summer tourist season and meet the official targets.” Bank of America Corp. strategist Athanasios Vamvakidis said in a note to clients on Tuesday.

People vaccinated before the entry into force of the new rules will be entitled to the passes, while certificates issued by member states should be valid for a six-week transitional period, according to the draft seen by Bloomberg.

Governments are “encouraged” to accept all vaccines that have secured World Health Organization approval for emergency use and should recognize certificates issued by non-EU nations, the plan says, paving the way for the resumption of incoming travel to the bloc.

The news from J&J comes after restrictions imposed on an AstraZeneca Plc vaccine in several states over similar side-effect concerns clouded the outlook for Europe’s already slow-moving vaccination program.