The European Union needs to invest 800 billion euros (US$834 billion) in four key green technologies this decade if it wants to end dependence on Russian energy, according to a group founded by U.S. billionaire Bill Gates.

Russia’s invasion of Ukraine and fears of a potential cutoff from gas -- which made up around 40 per cent of imports to the EU before the war -- have spurred a greater drive among member states to speed up the energy transition. While plans to curb reliance on Moscow call for more gas from other countries, clean power and green fuels are also seen as key to bolstering security of supply.

The EU needs to spend the equivalent of what it would on oil and gas to add more grid infrastructure for renewables, long-duration storage, clean hydrogen and sustainable aviation fuel, according to a report commissioned by Gates’ Breakthrough Energy from Boston Consulting Group. Those “enabling technologies” would allow it to cut energy dependency by around 1.4 million gigawatts -- about a 10th of its projected primary consumption in 2030.

“If we don't spend this, we're just not going to reach the targets that we want and we're just going to increase the risks and our dependency,” said Anders Porsborg-Smith, managing director at BCG. “The investments that are required here will significantly reduce the risk of us not making it.”

The EU is set to outline a 195 billion-euro plan on May 18 to reduce imports of Russian gas by two-thirds this year. That will involve accelerating the rollout of wind and solar power by cutting red tape, while encouraging consumers to save energy and better insulate their homes. It will propose raising its clean-energy goal for 2030 to 45 per cent from 40 per cent currently, people familiar with the matter said. 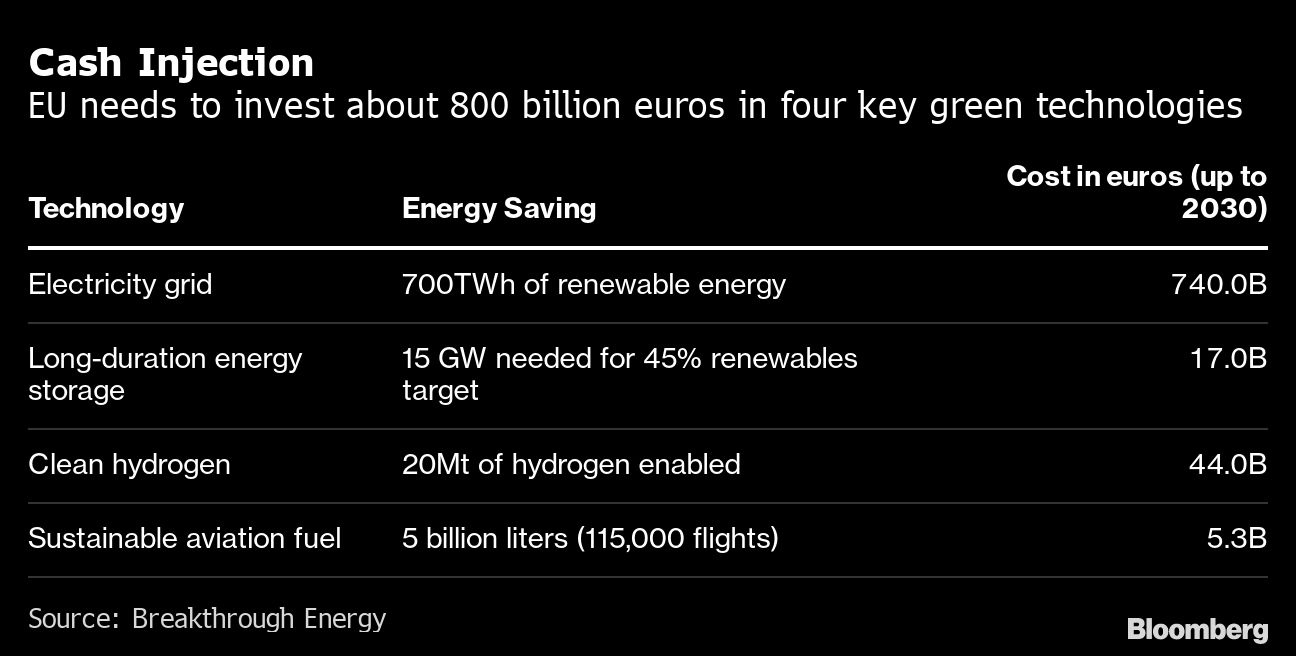 Investments in grids and power storage would help keep demand and supply in balance and ensure the energy system continues to function when the sun doesn’t shine or the wind doesn’t blow, according to Tuesday’s report. Clean hydrogen, meanwhile, is seen as crucial to decarbonize energy-intensive sectors such as steel and cement.

Last year, the European Commission joined forces with Breakthrough Energy Catalyst — a program within the Breakthrough Energy network — to invest as much as US$1 billion in areas such as green hydrogen and sustainable fuels. Earlier this year the group sent out a request for proposals.