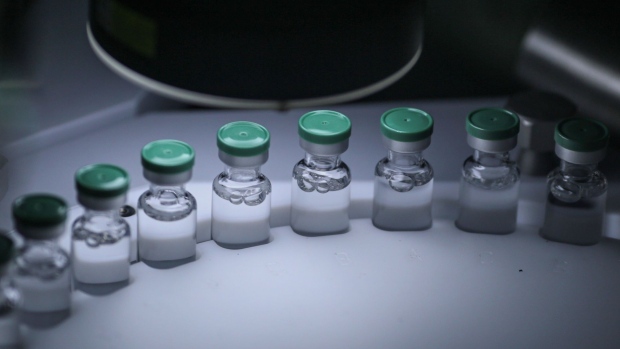 Vials of Covishield, the local name for the Covid-19 vaccine developed by AstraZeneca Plc. and the University of Oxford, move along a conveyor on the production line at the Serum Institute of India Ltd. Hadaspar plant in Pune, Maharashtra, India, on Friday, Jan. 22, 2021. Serum, which is the world's largest vaccine maker by volume, has an agreement with AstraZeneca to produce at least a billion doses. , Bloomberg

(Bloomberg) -- The European Union’s drastic plan to restrict exports of Covid-19 shots is more of a political ploy as prospects of successfully suing AstraZeneca Plc for reining in supplies of its vaccine appear slim, lawyers and trade experts said.

The bloc’s executive arm announced on Friday that vaccine makers including AstraZeneca must obtain prior authorization before sending shots manufactured in the bloc to other countries. The escalation follows a very public dispute with the company triggered by production delays at a Belgian plant.

“It’s pure damage control,” says Philip Haellmigk, an attorney in Munich who specializes in trade and customs controls. “This is a reaction to the failure of the EU to order enough vaccines in time” and is now about using “the tool of export control licenses to keep the vaccines in the EU,” he said.

The move -- on the same day the EU’s drug regulator cleared the Covid-19 vaccine from AstraZeneca and the University of Oxford for all adults -- comes as pressure mounts on top EU officials for lagging far behind the U.K. and U.S. in the race to inoculate citizens. The EU had administered just 2.5 doses per 100 people in the bloc, compared with 8.3 in the U.S. and 11.9 in the U.K., according to Bloomberg data.

EU Trade Commissioner Valdis Dombrovskis on Friday defended the restrictions, which will run until the end of March and allow EU states to block exports if a set of pre-defined criteria haven’t been met.

“The protections and safety of our citizens is a priority and the challenges we now face left us with no choice but to act,” Dombrovskis told reporters in Brussels.

Export curbs are not a new tool in the European Commission’s arsenal and are typically applied to goods deemed sensitive, including weapons. But they are likely to inflame relations with the U.K.

It “sets a dangerous precedent,” said Scott Rosenstein, health care adviser at the Eurasia group. “There has always been the expectation that when the supply exceeds the demand that countries who are manufacturing the vaccine will work to make sure that their domestic supply is spoken for. That’s what we’re seeing here.”

Messages left with the AstraZeneca press office were not immediately returned. Pascal Soriot, the company’s chief executive officer, has said that once it got EU approval it would ship at least 3 million doses immediately, with a target of 17 million by February.

While the controversial step raises questions about legality, World Trade Organization rules regarding export restrictions have exemptions in the event of critical shortages of essential products or the need to protect human life and health.

Far less clear are the chances of EU success in a simmering contractual dispute with AstraZeneca -- even with home advantage in Belgian courts.

“What could they claim? Not so much at the moment, if you ask me,” said Christophe Ronse, a healthcare and IP lawyer for Altius in Brussels. “There is not so much they can do, unless they have some smoking gun. It’s an issue of political pressure.”

Earlier on Friday, AstraZeneca succumbed to pressure from the commission to disclose its contract with the EU.

But rather than providing proof that the drugmaker was in breach of the agreement, lawyers said the fine print including the phrase “best reasonable efforts” may give the drugmaker wiggle room to argue it didn’t violate contractual terms.

While the contract refers to a “binding allocation” of initial Europe doses, that clause may be undermined by the best reasonable efforts expectation, said Christopher Newdick, a professor of health law at the University of Reading.

“What does the word ‘binding’ mean in a general context of best endeavours?” said Newdick. “As so often happens, a problem has arisen which is not squarely addressed and so lawyers need to interpret these clauses in the context of the contract as a whole.”

If the EU believed it had such a strong claim, it would have gone to court in Belgium to make an order in its favor, said Steven Barrett at Radcliffe Chambers in London.

“By not going down that route, it has chosen a political solution,” he said.