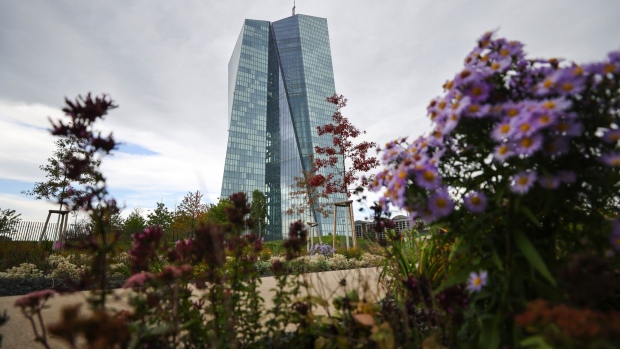 The European Central Bank (ECB) headquarters in Frankfurt, Germany, on Wednesday, Oct. 21, 2020. A push for a ECB green lending program to help the fight against climate change has run into skepticism despite attracting the interest of President Christine Lagarde. Photographer: Alex Kraus/Bloomberg , Bloomberg

(Bloomberg) -- The European Union is testing investors’ appetite to fund nearly $1 trillion of debt over five years as it seeks to finance its recovery from the coronavirus pandemic.

The bloc opened books on debut 10-year bonds as part of its NextGenerationEU (NGEU) program, which will finance grants and loans to member states. European Central Bank President Christine Lagarde said in an interview published Monday the NGEU stimulus will “transform the future of Europe.”

EU debt tied to its separate and smaller SURE program has underperformed as investors brace for a wave of supply in the coming months, with the bloc looking to raise 100 billion euros ($121 billion) in long-term bonds this year alone. The 10-year SURE bonds are trading near their widest spread to equivalent German debt since their issuance in October.

“A decent new issue premium on top of cheapened levels versus swaps and French bonds of late should ensure that NGEU gets off to a successful start,” said Commerzbank strategists including Rainer Guntermann in a note Monday. “The transaction size is skewed to the upside with possibly more than 10 billion euros given the EU’s heavy workload until year-end.”

The EU will conduct three syndicated NGEU bond sales before the August summer break, it said in an investor call last week. The NGEU green bond framework will be published by September after which sales can begin, with almost a third of the plan’s roughly 800 billion euros to be in green debt.

Yields across the region have risen in recent months with economies reopening and consumer prices expected to accelerate, dampening appeal for SURE debt. Still, the scale of the NGEU issuance has led the securities to be touted as a one-day rival to U.S. Treasuries in the longer-term, given the current scarcity of German bonds -- the region’s haven asset -- and the risks associated with holding riskier peripheral debt.

“We expect a convergence to Germany of the EU bonds, but not to replace the German safe-haven status,” said Danske Bank strategists including Jens Peter Sorensen, noting there are no plans for further funding beyond 2026.