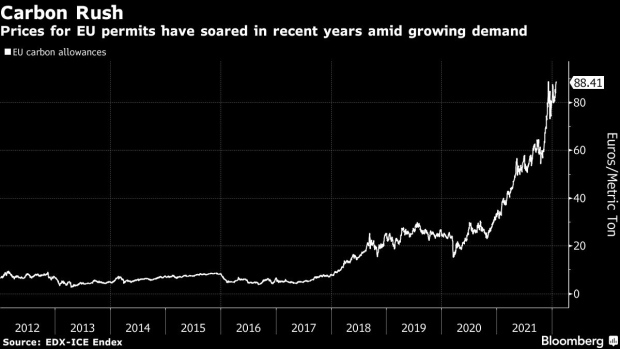 High voltage electricity power lines near cooling towers at the Jaenschwalde lignite-fired power station near Peitz, Germany, on Thursday, Oct. 28, 2021. The G-20 is meeting in Rome this weekend right before COP26 in Glasgow, the United Nations gathering that aims to set specific goals to wean nations off coal and other noxious substances for good. Photographer: Krisztian Bocsi/Bloomberg , Bloomberg

(Bloomberg) -- A lawmaker from the European Union’s biggest political group is proposing that the bloc abandon fast-tracking a measure to stabilize its carbon market, and instead link it to a broader overhaul of the emissions trading program.

Adam Jarubas, a Polish member of the European People’s Party, has put forth the amendment in the EU Parliament’s environment committee. The panel is debating a draft regulation by the European Commission to bolster the Market Stability Reserve, designed to curb excess emissions permits.

The EU is moving to meet stricter climate goals, with the aim of cutting emissions by 55% from 1990 levels by the end of this decade and achieving carbon neutrality by mid-century.

As part of its environmental objectives, the EU executive wants to extend until 2030 the MSR’s intake rate of 24% -- the percentage of carbon permits taken into the reserve from the market -- which is currently double the original amount. Separately, the Commission has proposed a sweeping reform to bolster its Emissions Trading System, which would take more time to be approved.

“Any changes to the Market Stability Reserve should be part of the bigger package,” Jarubas said in an interview on Wednesday. “Under the current law, the double intake rate would expire only in late 2023, and the broader reform of the EU ETS should be agreed by then.”

The parliament’s lead lawmaker on the MSR, Cyrus Engerer, recommends that the environment committee back the Commission’s proposal. Jarubas’s amendment would remove the provision to extend the 24% intake rate.

The MSR, designed to alleviate a surplus of permits that pushed prices as low as 2.46 euros ($2.76) in 2013, helped restore investors’ confidence in the EU carbon market. Since its introduction in 2019, prices for carbon permits have more than tripled, hitting a record 90.75 euros per metric ton in December.

In its current design, the reserve absorbs 24% of permits in circulation when their total number exceeds 833 million. Under the commission’s proposal, if there are more than 1.096 billion allowances in circulation, including permits for aviation, the intake rate would remain at 24% until 2030. When the number of permits is between 833 million and 1.096 billion, a new calculation would apply.

“Current EU carbon prices suggest that there’s no excess of permits in the market,” Jarubas said. “We will come up with concrete solutions as to when a stronger intake rate should be applied.”