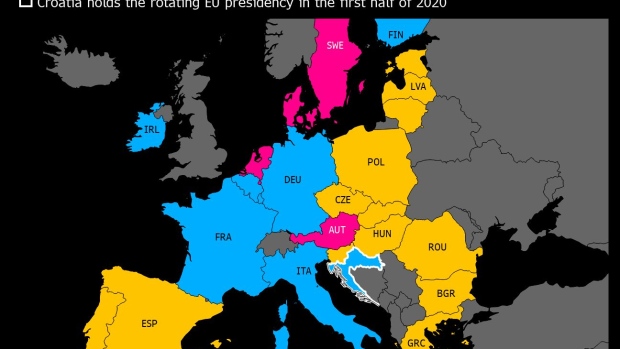 (Bloomberg) -- European Union leaders failed to clinch a deal on its next long-term budget as deep divisions over spending bubbled up in the aftermath of Brexit.

After a 28-hour extraordinary summit in Brussels, officials conceded it was impossible to nail down a seven-year spending plan and agreed to reconvene at a future date, according to an official familiar with the matter.

The final accord will signal whether Europe is prepared to spend more collectively to further its goals, whether it wants to prioritize innovation over handouts to traditional industries and whether it’s prepared to wield its financial muscle to force member-states like Hungary and Poland to respect the rule of law.

The trillion-euro budget is a cornerstone of EU policy that lets farmers compete against imports from the developing world, helps poorer states catch up with the rich ones and underpins projects that bind the union together.

But the joint pot of money is also a lightning rod for tensions running through the bloc. After three years of uncharacteristic unity during the Brexit negotiations, passions ran high in recent months, intensifying divisions among the 27 member states.

The budget talks are further complicated by the U.K.’s departure, which leaves a hole of at least 60 billion euros ($65 billion) that needs to be plugged by either cutting spending or making others pay more.

The EU’s shifting priorities also require money for issues like climate change and migration, while those who gain from the traditional focus on agriculture and regional development are fighting to keep their benefits.

Leaders spent the vast majority of the summit in different groups as they sought to strike alliances and bridge differences over the size and details of the budget. Meanwhile, technical officials from each country were on standby for the duration, armed with laptops and notepads ready to sift through any new proposal.

The EU was essentially split into two camps: those who want to spend more, and those who can see they’ll get stuck with the bill.

The Netherlands, Austria, Denmark and Sweden, known as the “Frugal Four,” joined Germany in arguing for keeping the spending ceiling at 1% of the EU’s gross national income. The countries -- all net payers -- are cognizant of the backlash they could face at home for agreeing to pay more.

They also pushed for establishing a permanent system of rebates -- corrections granted to countries that make the largest net contributions. Other nations want such arrangements phased out or abolished.

On the other side are some 16 southern and eastern countries who see regional funding as a key tool to help them catch up with wealthier neighbors. They want a spending ceiling closer to the 1.1% proposed by the European Commission. The European Parliament has called for 1.3% and has threatened to derail any accord if it doesn’t get it.

The breakdown came even after a last-minute attempt by the commission to table a compromise that sought to strike a more palatable balance between spending on new priorities and traditional outlays and proposed a new ceiling of 1.069% of GNI. Despite offering sweeteners to the frugal camp in the form of attractive rebates, it was shot down as not good enough.

A deal needs to be struck before year-end otherwise several spending plans for 2021 could be frozen, including funding for poorer regions.

In the end, leaders concurred that striking a good deal was more important than striking one quickly, even if that means heading back to Brussels for another round of marathon talks in a few weeks’ time.

To contact the editors responsible for this story: Ben Sills at bsills@bloomberg.net, Richard Bravo, Andrew Langley