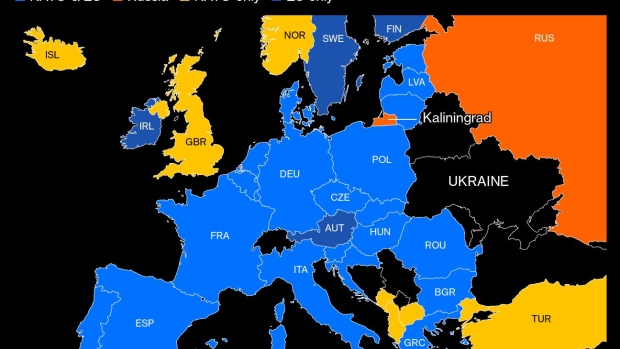 (Bloomberg) -- Some European countries are raising concerns that the European Union is trying to pressure Lithuania into watering down the bloc’s sanctions to allow some banned goods to transit through its territory to Russia’s Baltic exclave Kaliningrad, according to people familiar with the matter.

The worries come as the standoff over Kaliningrad escalates, with Lithuanian government institutions reporting a fresh wave of “intense” cyber attacks. Russia has said it will retaliate against the EU member state for blocking rail transport of goods such as steel in accordance with the bloc’s sanction measures.

While the European Commission said last week Lithuania was imposing the restrictions in line with the way sanctions were rolled out, it said it would provide additional guidance on the issue. The officials’ concerns were that Lithuania could effectively be asked to offer exemptions for banned Russian goods bound for Kaliningrad, according to one official who spoke on condition of anonymity.

While many member states in the bloc were eager to defuse the standoff, several others bridled at the prospect of diluting sanctions in response to Russia’s threats, the official said. Lithuanian Prime Minister Ingrida Simonyte said Monday that discussions with the Commission were ongoing, while the country’s president, Gitanas Nauseda warned over the weekend that weakening sanctions would amount to “appeasement.”

“Our position is simple: sanctions must be implemented,” Simonyte told reporters in Vilnius on Monday. “Any decisions taken shouldn’t compromise the European Union itself.”

Lithuania has accused the Kremlin of waging a propaganda campaign over the issue, saying the restrictions tied to EU measures involve only a small portion of trade. The pressure will likely intensify as an EU ban on coal, gasoline and diesel shipments from Russia take effect in coming months.

The cyber assault is likely to continue over the coming days, particularly in the communications, energy and finance sectors, the ministry said, warning of an increased risk of ransomeware and defacement attacks. Authorities were in contact with three international Internet providers.

Defense Minister Arvydas Anusauskas said he didn’t rule out that the increase may be related to the standoff over Kaliningrad.

Kaliningrad’s geographic position between Lithuania and Poland leaves its population cut off from Russia’s main territory, though shipments still arrive by air and sea. Transit of people and non-sanctioned goods remains unaffected by the restrictions.