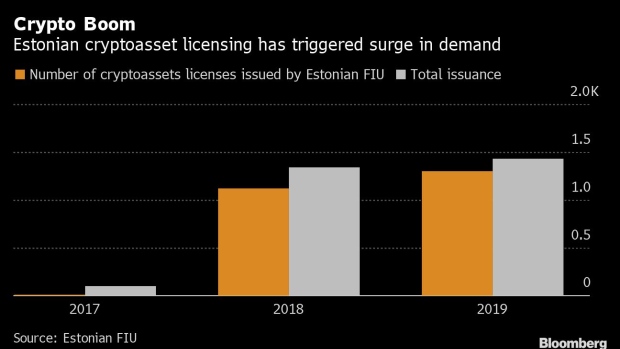 A chart of bitcoin prices against Japanese yen is displayed on a computer monitor via software for trading virtual currencies in Tokyo, Japan, on Wednesday, Aug. 30, 2017. Stock of Bitcoin, the best-known digital currency, has surged 358 percent this year. While staggering, lesser-known competitors have seen even bigger gains, such as the more than 4,000 percent increase for ethereum. Photographer: Tomohiro Ohsumi/Bloomberg , Photographer: Tomohiro Ohsumi/Bloomberg

The country in the spotlight of Europe’s biggest-ever dirty-money scandal is turning its attention from banks to crypto-currency firms.

Estonia, a digital trailblazer that’s a European Union and euro-area member, has been clamping down to prevent financial crime after allegations that billions of dollars of illicit cash flowed through the local unit of Denmark’s largest lender Danske Bank A/S.

Its latest push targets companies that exchange and help clients hold virtual currencies like Bitcoin -- an industry that Estonia was among the first in the EU to license in late 2017. Regulators worried the firms are using their local credentials to help commit fraud elsewhere have stripped more than 500 -- a third of total -- of their permits this year, according to Madis Reimand, who heads the Baltic country’s Financial Intelligence Unit.

“This is a first step in tidying up the market, allowing us to take care of the most urgent issues by permitting operations only for companies that can be subjected to Estonian supervision and coercive measures,” Reimand said in a phone interview.

The crackdown so far has largely concerned companies that failed to start operations in Estonia within six months of getting a permit. Stricter licensing rules have also been enacted by parliament after warnings from supervisors about surging issuance since 2018.

Estonia was “probably giving out those permits too easily to God knows what companies,” Andre Nomm, a member of the Estonian Financial Supervision Authority’s management board, said last year. Licenses have been used to “create credibility for some evil schemes.”

More than a half of the remaining 900 crypto companies may lose their licenses as they have no operations in Estonia and their managers are outside the country, according to Reimand.