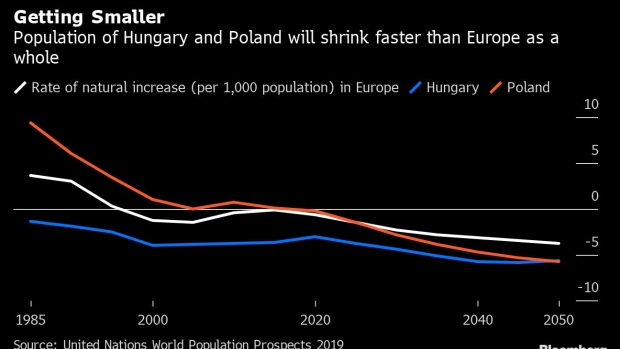 (Bloomberg) -- Europe’s nationalist leaders called for pro-family and anti-immigration policies to resolve a demographic crisis, even as declining populations and severe labor shortages force them to open their doors to foreign workers.

Hungarian Prime Minister Viktor Orban hosted the leaders of the Czech Republic, Serbia and Slovenia at a demographic-focused forum in Budapest, where he said immigration was a threat to the survival of western civilization rather than an antidote.

“Some civilizations are capable of reproducing themselves, western civilization isn’t,” Orban, who’s become a trailblazer for fellow nationalists in the European Union, told the forum on Thursday that also included former U.S. Vice President Mike Pence. “Worse, it can’t even decide if that’s a problem.”

Opposition to immigration has underpinned a nationalist turn sweeping across much of eastern Europe. That has been accompanied by the rolling back of democratic freedoms in countries like Hungary, Poland and Slovenia, straining relations within the EU.

The stance also clashes with a raft of economic studies that show immigration boosts the economies and wages of countries that open their doors to foreign workers. The International Monetary Fund has said that for every 1 percentage-point increase in the inflow of immigrants relative to total employment in rich nations, output increases by 1% within five years.

While pro-family measures including tax rebates and housing subsidies have helped eastern European leaders win elections, expand economic growth and even boost fertility rates, the region continues to be among those with the fastest rates of population declines, according to United Nations data.

Slovenian Prime Minister Janez Jansa, who chairs the EU’s rotating presidency, called it the “elephant in the room.”

Czech Prime Minister Andrej Babis, who visited Hungary’s barbed-wire border fence on Tuesday, which Orban erected to keep people out during Europe’s 2015 refugee crisis, railed against “mass uncontrolled migration.” He said Oct. 8-9 elections will boil down to the issue of immigration and voters will decide “who will live and work” in the country.

Away from the spotlight though, many of these same leaders have joined the race to lure foreign workers -- for example from Ukraine and other poorer European states -- to prevent dire labor shortages from smothering their economies as they struggle to recover from the coronavirus pandemic.

There was little acknowledgment of the contradictions. Pence, invited as a guest speaker, maintained there was no middle ground.

“You can be for working-class families, or you can be for open borders, but you can’t be for both,” Pence said.