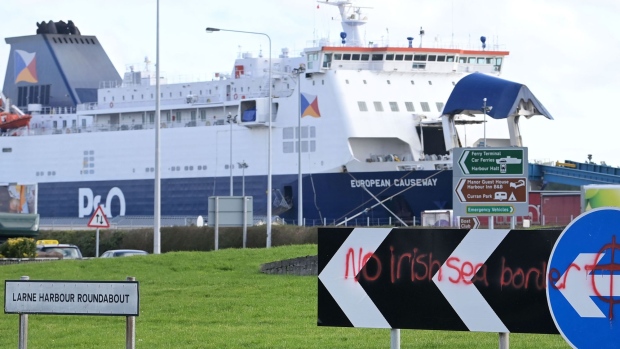 (Bloomberg) -- European Union member states are gearing up to consider suspending the bloc’s trade agreement with the UK if London takes concrete action to override parts of the Brexit deal, according to officials.

EU ambassadors met Wednesday with Maros Sefcovic, the European Commission’s chief Brexit negotiator, for their first discussion since the British government this week set out its plans to unilaterally revoke some of its commitments to regulate trade with Northern Ireland.

The envoys strongly backed the commission’s approach of trying to strike a balance between not provoking the UK while preparing painful consequences if London moves ahead, said the officials, who declined to be named on confidential talks.

The EU’s executive arm would likely propose suspending the entire trade agreement if Prime Minister Boris Johnson makes good on his threats to pass legislation to unilaterally rewrite parts of the Northern Ireland protocol. The final decision on details and timing of any retaliation would need the backing of member states.

In the meantime, the EU position is to stick to a calm and gradual approach, retaliating only when London makes specific moves, the officials said, noting that any UK legislation could take months to be approved.

London plans to introduce legislation on the issue within weeks. Foreign Secretary Liz Truss said on Tuesday that the UK would prefer to reach a negotiated solution, but the situation in Northern Ireland means Britain has to act.

Member states made clear at the ambassadors meeting that all options are on the table, one official said. These include calling into question the EU-UK Trade and Cooperation Agreement which was painstakingly hammered out and signed on Dec. 30, 2020 to allow tariff-free commerce, another official said.

Germany called at the meeting for a flexible response to any UK moves, broadly inspired by a doctrine of the NATO military alliance on meeting challenges with a proportional reaction, an official said.

Several member states including Poland spoke at the meeting of their disappointment and annoyance at the UK’s stance at a time when it was important to demonstrate European solidarity in the face of the war in Ukraine, according to the officials.

Truss told lawmakers earlier this week that London had to act because the Belfast Good Friday Agreement “is under strain,” referring to the 1998 agreement that restored peace in Northern Ireland after decades of violence.

Johnson’s government is frustrated that the deal it signed has created a customs border between Northern Ireland and the rest of the UK, snarling trade and contributing to the collapse of the region’s devolved government.

The commission told diplomats it’s ready to convene a meeting of the EU-UK Joint Committee requested by Truss, but only if the UK officials are willing to discuss ways to better implement the Northern Ireland protocol, according to a person familiar with the matter.