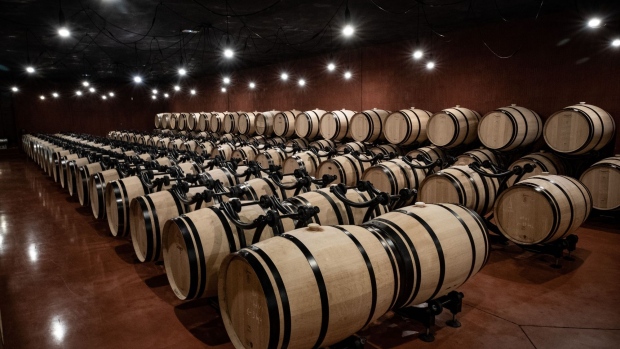 Wine barrels sit in the cellars of Chateau La Dominique vineyard and winery in Pomerol, France, on Monday, Sept. 23, 2019. The U.S. is moving ahead with an investigation into a new French digital tax that could lead to import tariffs on French wine and other goods, despite hopes raised at August's G-7 summit. , Bloomberg

(Bloomberg) -- The European Union and New Zealand concluded talks on a new free-trade agreement Thursday. The two regions do about 11.5 billion euros ($12 billion) of trade in goods and services a year.

Under the deal, tariffs will be eliminated on a range of products such as pig meat, wine and chocolate, saving EU businesses around 140 million euros in duties a year, European Commission Executive Vice-President Valdis Dombrovskis told reporters on Thursday. The accord will boost the bloc’s exports to New Zealand by as much as 4.5 billion euros per year.

The deal is also the first to include sanctions in the event of a material breach of the Paris Climate Agreement.

“In terms of sustainability, this is the most ambitious trade agreement ever concluded,” Dombrovskis said, adding that it could boost trade between the regions by 30%.

The accord is one of the stalled trade deals that the commission is seeking to conclude this year, reinforcing strategic alliances amid the turmoil caused by Russia’s invasion of Ukraine.

The agreement also contains rules on digital trade, provisions on gender equality and fossil fuel subsidies reform as well as liberalization of green goods and services.