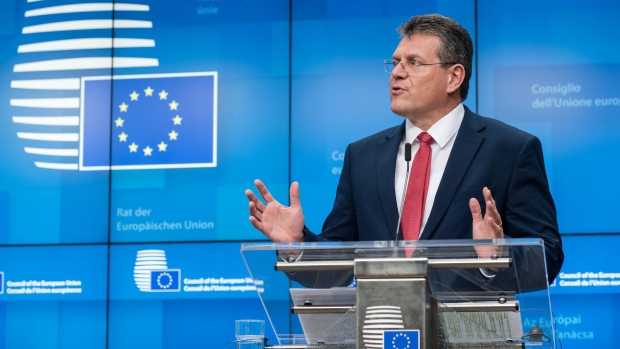 The European Union offered an olive branch to the U.K. to ease trade barriers in Northern Ireland, but the bloc’s proposed concessions still leave a wide gap between the two sides on the eve of a new round of Brexit talks. Maros Sefcovic, the EU’s chief Brexit negotiator, unveiled a set of adjustments to the Northern Ireland protocol on Wednesday that would reduce customs checks into the territory by half and cut sanitary checks on many retail goods including ham and sausages by 80%.

“We have put a lot of hard work into this package, explored every possible angle of the protocol, and at times went beyond current EU law,” Sefcovic said at a news conference. “In effect, we are proposing an alternative model for implementation of the protocol.”

“It is my hope that in the coming weeks we will jointly arrive at an agreed solution that Northern Ireland truly deserves,” he added.

As part of the U.K.’s departure from the bloc, Britain signed up to the protocol, which kept the province in the EU’s single market -- unlike the rest of the U.K. This allowed the U.K. to shed EU regulations without creating a hard border on the island of Ireland.

Sefcovic’s package, described by EU officials as not being a take-it or leave-it offer, leaves a host of sticking points for a new round of negotiations in London over the coming days. Failure to clinch a resolution could pave the way to tit-for-tat economic retaliation, reopening the wounds from the fraught Brexit negotiations.

The EU procedures for medicines would remain largely unchanged, with all the current U.K. regulatory measures in place.

The EU insists it won’t renegotiate the accord, which is a binding international treaty, despite U.K. Brexit minister David Frost saying in a speech Tuesday that the protocol is flawed and offering a replacement “forward-looking” version.

On Wednesday, he told the House of Lords that the U.K. will consider the EU’s offer and wants to begin intensive talks.

“If there are elements in them with which we can work, we will look to do so,” he said. “We are beginning a negotiation and we’ve got a track record of reaching successful outcomes in negotiations.”

But the EU isn’t ready to accept Frost’s rejection of the authority of the European Court of Justice over trade between Britain and Northern Ireland, EU officials said. The ECJ issue isn’t raised by stakeholders and citizens in Northern Ireland, said one EU diplomat.

“It’s very clear that you cannot have access to the single market without the supervision of the ECJ,” Sefcovic said. “But I think that we should really put aside this business of the red lines, the business of deadlines, real or artificial, and we should really focus on what we hear from the stakeholders and the people in Northern Ireland.”

Sefcovic’s proposals involve a different model for implementation of the protocol, with few checks but more structured safeguards and governance, one of the EU officials said.

The EU’s proposals are “far-reaching” and “comprehensively address the practical, genuine issues that matter most” to Northern Ireland, Irish foreign minister Simon Coveney said in an emailed statement.

“Some of the solutions being mooted go some way towards meeting those tests, however, we will reserve judgment until we have seen both legal and technical texts,” the group said in a statement.

What happens next will depend on how realistic London proves to be, and any solution needs to provide stability, certainty and predictability to Northern Ireland, the EU official said. The protocol extends the single market to Northern Ireland, and that involves the ECJ, he said, making the case that taking out the ECJ and means taking out the single market.

Frost said Tuesday the U.K. is prepared to trigger Article 16 -- a clause in the protocol that allows for unilateral safeguard measures if “serious economic, societal or environmental difficulties” result from its implementation. The EU has warned it’s prepared to respond with legal and retaliatory trade measures.

If Britain invokes Article 16, the EU has the right to take immediate and proportionate re-balancing measures, depending on the U.K.’s actions. A trade war is possible, with options for the EU including seeking to impose tariffs on sensitive industries, or dialing up the intensity of customs checks on goods crossing the English Channel.

But Frost did leave space for compromise. “There are several stages in this process where everybody can look carefully at it and decide to pull back from the brink,” he said in remarks after his speech.

The European Commission has said previously that the U.K. hasn’t done enough to demonstrate it intends to honor its obligations under the protocol. While European officials have been given access to the computer systems which register goods entering Northern Ireland, the U.K. hasn’t made progress on building the physical infrastructure needed for the border checks.

The protocol has been signed and ratified, and insisting on constitutional issues that have little impact on trade will lead us nowhere, the EU official said, adding that the bloc is hoping for the best but preparing for the worst.

In another post-Brexit dispute, French government spokesman Gabriel Attal told reporters it could announce bilateral retaliation measures against the U.K. at the end of next week, if London still doesn’t comply with its commitments on granting fishing rights. A French minister earlier this month indicated France could threaten Britain’s electricity supplies.