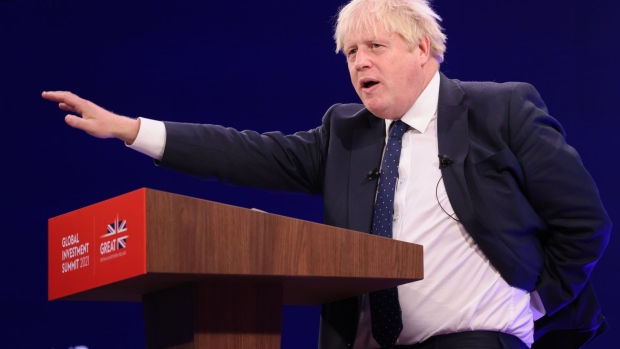 Boris Johnson, U.K. prime minister, delivers the opening remarks during the Global Investment Summit (GIS) 2021 at the Science Museum in London, U.K., on Tuesday, Oct. 19, 2021. Johnson is hosting the summit, where as many as 200 CEOs and investors are expected to gather. , Bloomberg

(Bloomberg) -- European Union diplomats heading to Glasgow for climate change talks are concerned that a dozen smaller side deals planned by the U.K. could undermine progress on the key COP26 negotiations.

The annual United Nations summit, which starts Oct. 31, is predominately a fortnight of talks between countries to thrash out global agreements on avoiding catastrophic climate change. Top of the agenda this year is reaching an agreement on developing a global carbon market. It’s the only part of the Paris rulebook that is unfinished because the EU and other developed countries walked away from the table in 2019.

But the U.K. presidency has this year for the first time decided to add a new element to the COP -- asking countries to sign up to side deals on everything from ending coal to protecting forests and tackling aviation emissions.

One EU official, speaking on condition of anonymity, said there was a risk those side deals could distract from efforts to ensure the environmental integrity of any UN governed carbon market that is negotiated. The EU and Brazil have been at loggerheads over the question of whether to allow double counting of credits, whereby both the seller and the buyer gets to include the emissions savings in their accounts. Environmental groups have warned that a compromise could actually lead to more carbon being released into the atmosphere.

This year, nations are also required to submit enhanced national pledges showing how they will cut carbon by 2030 in order to limit global warming to 1.5 degrees Celsius compared to pre industrial levels. However, big emitters including China and India have failed to do so.

The EU official said there is concern that this pressing goal could get lost in the side deals. The current pledges on the table put the world on track for 2.7 degrees of warming, according to the latest UN calculations.

While side deals at such summits are a normal part of the process, the U.K. government has taken this to another level by asking countries to sign up to sectoral agreements almost every day. EU negotiators haven’t yet worked through all the proposals, the official said.

However, the U.K. COP26 Presidency says the side deals are designed to bolster climate action in a year when there is less to negotiate than in previous summits. On Monday, U.K. Prime Minister Boris Johnson issued a last ditch call for countries to submit their Nationally Determined Contributions ahead of COP26 if they haven’t already.