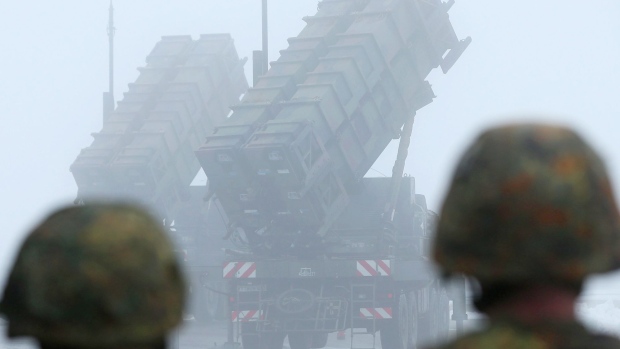 WARBELOW, GERMANY - DECEMBER 18: Members of the German Bundeswehr look on as two Patriot missile launching systems stand ready during a press day presentation at the Luftwaffe Warbelow training center on December 18, 2012 in Warbelow, Germany. Germany, along with the USA and the Netherlands, will send two Patriot systems to Turkey in January to protect Turkey from Syrian attacks. (Photo by Sean Gallup/Getty Images) , Photographer: Sean Gallup/Getty Images

(Bloomberg) -- The European Union is working on new investment instruments to fund the bloc’s military spending as part of an overhauled defense strategy following Russia’s invasion of Ukraine, according to a draft report seen by Bloomberg.

The set of instruments -- collectively dubbed Defend-EU -- would enable the bloc “to map, coordinate and incentivize joint development, procurement and ownership across the full life cycle of defense equipment,” the document says.

The proposals, which could be presented to ministers as early as next week, include a new vehicle outside the regular budget that would channel member state defense contributions on a voluntary basis. The EU is also proposing to lift the European Investment Bank’s current exclusions on defense projects, and, in the longer term, set up a new joint procurement entity.

The report says that its proposals would be equally beneficial for NATO, which remains the cornerstone of European collective defense, and its priorities mesh with those of the military alliance. “EU initiatives to foster defense cooperation also help reinforce a fairer transatlantic burden-sharing and a more effective European contribution within NATO,” the document says.

Russia’s invasion of Ukraine has dramatically changed Europe’s security landscape with significant implications for the bloc’s defense. Member states have announced substantial increases in their defense budgets of nearly 200 billion euros ($208 billion) in the coming years, the document says. However, the war in Ukraine has also exposed years of underspending, inefficiencies and gaps in Europe’s capabilities.

The report lists some of these key defense gaps, including:

The proposals also include a one-off EU solidarity reimbursement scheme for joint procurement to help those nations that have assisted Ukraine most to replenish their stocks with European supplies, as well as recommendations to better focus existing mechanisms and incentives to boost the bloc’s industrial capacity, including access to key components.

The report acknowledges that the EU doesn’t have much margin left within its current budget to meaningfully increase the European Defense Fund, which by the end of 2022 will have spent nearly 2.5 billion euros on defense research and capability development projects. Member states may need to have a wider discussion about the consequences the war in Ukraine has had on the bloc’s spending plans and priorities, the document says.

The document is still a draft and may change before it is finalized and the proposals also need the backing of member states.