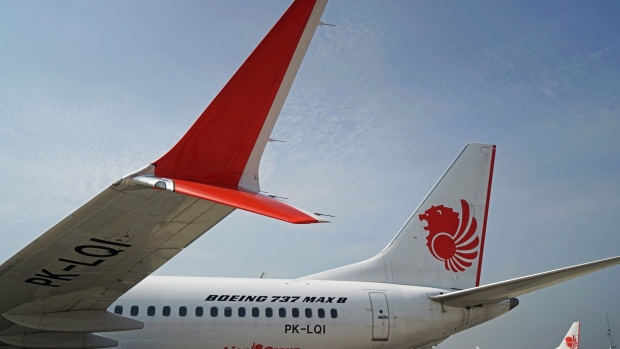 European regulators assessing changes to Boeing Co.’s grounded 737 Max will scrutinize the jet’s entire flight-control system before a return to the skies can be approved.

The review by the European Union Aviation Safety Agency will include the plane’s displays, alerts and air-data systems, as well as the aircraft’s autopilot function, EASA Director Patrick Ky wrote in a letter dated May 27 and seen by Bloomberg. The update was sent to members of the EU Parliament’s Transport Committee in response to questions they raised last month about aviation oversight. The Max was grounded earlier this year following two fatal crashes in Indonesia and Ethiopia that killed almost 350 people.

For the Max to return to service, Boeing will have to show that the probability of a “catastrophic failure” is less than one-in-a-billion flight hours -- the standard in the industry, according to Ky.

When an action by a crew member is required to meet those odds, EASA will re-evaluate “both the man-machine interface and the training” procedures for pilots, he said. In each of the Max accidents, pilots tried unsuccessfully to pull the plane out of a dive triggered by an erroneous sensor.

EASA and Boeing didn’t immediately respond to requests for comment.

EASA’s comments show the extent of the European regulator’s plans for independently ensuring the Max’s safety, which could add to the time the plane remains grounded in the region. Some members of the EU parliament’s transport committee have raised concerns that the U.S. Federal Aviation Administration delegated part of the aircraft certification process to Boeing itself, and queried whether there were safeguards between EASA and European manufacturers.

Investigations into the cause of the two incidents have focused on a flight-control system that may have contributed to the planes’ sudden and deadly descents shortly after takeoff. Ahead of a meeting of global safety agencies last week, Boeing said it had successfully performed more than 200 flights with an upgraded version of the software.

Europe’s biggest pilot lobby last week criticized EASA, demanding that the agency take a hard stance in vetting U.S. plans to return the Max to service and to make an effort to repair the confidence of air crew in regulators. Jon Horne, president of the European Cockpit Association, which represents pilots at Max customers including Ryanair Holdings Plc and Norwegian Air Shuttle ASA, called for new training requirements, including new additional simulator training which Boeing has so far resisted.

EASA is “permanently self-reflecting” on improving the oversight system in Europe and “any accident or serious incident may provide important inputs to this reflection,” Ky said.​