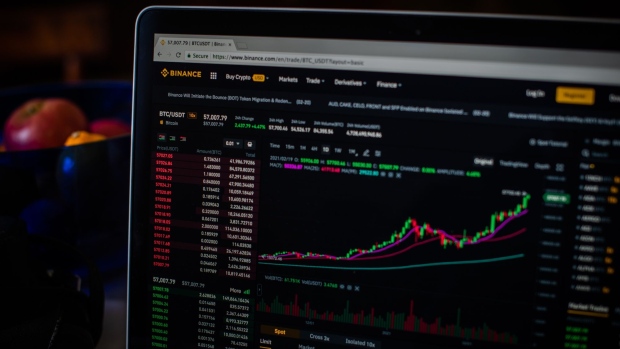 The Binance Exchange website on a laptop computer arranged in Dobbs Ferry, New York, U.S., on Saturday, Feb. 20, 2021. Bitcoin has been battered by negative comments this week, with long-time skeptic and now Treasury Secretary Janet Yellen saying at a New York Times conference on Monday that the token is an “extremely inefficient way of conducting transactions.” Photographer: Tiffany Hagler-Geard/Bloomberg , Bloomberg

The European Union is proposing to prohibit anonymous cryptocurrency transactions as part of a broader plan to combat money laundering and terrorism financing.

The EU plan unveiled Tuesday includes a number of proposals to boost the supervision of financial transactions, including creating a new EU body with around 250 staff members to supervise risky financial institutions and prohibiting cash transactions higher than 10,000 euros ($11,800).

In particular, the EU would ban anonymous crypto asset wallets, according to an EU fact sheet, with the European Commission saying that systems like Bitcoin should be governed by the same rules as regular bank wire transfers.

“We shouldn’t have different rules for the financial system. They should apply across digital currencies as well,” EU financial srevices commissioner Mairead McGuinness said at a news conference Tuesday.

The package would have to be approved by the European Parliament and the European Council, which can be a lengthy process. The EU said its aim is to make the new anti-money laundering body operational starting in 2024.

“Money laundering poses a clear and present threat to citizens, democratic institutions, and the financial system,” McGuinness said in a prepared statement. “Today’s package significantly ramps up our efforts to stop dirty money being washed through the financial system.”

(Updates with McGuinness quote in news conference in fourth paragraph)