The action on coal -- which von der Leyen said would amount to 4 billion euros (US$4.4 billion) a year -- would allow for a three-month wind-down before a ban on new contracts, according to two people familiar with the matter.

The EU will also push ahead with a debate on targeting Russian oil, including perhaps an escrow account to freeze extra profits, von der Leyen said.

The coal provision was added to a package of steps aimed at strengthening existing measures and correcting loopholes that was already set to be debated this week by EU ambassadors. The European Commission is also proposing to ban most Russian trucks and ships from entering the bloc, von der Leyen said, with exceptions allowed for agricultural products, humanitarian aid and energy.

“These atrocities cannot and will not be left unanswered,” von der Leyen said.

Germany, which had previously blocked efforts to embargo Russian energy, is ready to consider a Russian coal ban and is in discussion with the EU about the timing of such a move, according to a German official with knowledge of the discussions.

Year-ahead futures for coal delivered to northwest Europe jumped as much as 7.9 per cent to US$205 a ton. Russia supplies about half of the continent’s thermal coal, used to fuel its power stations and generate electricity.

The EU isn’t planning to sanction oil or gas for now, despite intense pressure to inflict more economic pain on Moscow, the people said. But EU nations are deeply split over the next steps and some governments are continuing to push for at least a signal this week that the bloc is looking to reduce Russian oil imports, one of the people said.

“We are working on additional sanctions including on oil imports and we are reflecting on some of the ideas presented by the member states, such as taxes or specific payment channels such as an escrow account,” von der Leyen said.

One option short of an outright oil ban would be to phase out Russian oil and use Europe’s strategic oil reserves to cushion the impact, says a senior EU official. Another option would be to put tariffs on the sector, while a third option would be to create en escrow account to freeze the extra profit Russia is making off oil prices rises since the war started, the official said.

Several governments, including Germany and Hungary, have resisted expanding the scope of sanctions to Russia’s energy sector, but the allegations that retreating Russian troops had executed scores of unarmed civilians led to a renewed push by some of the bloc’s eastern members to strengthen those measures. EU leaders have already endorsed the goal of phasing out its reliance on all Russian fossil fuels by 2027.

Even before sanctions, European energy companies were already struggling to get their hands on Russian coal. Many banks were refusing to finance commodities trading, forcing some of the continent’s biggest utilities to buy coal in South Africa and Australia.

Approval of the package and the ban on coal requires the backing of all 27 member states. 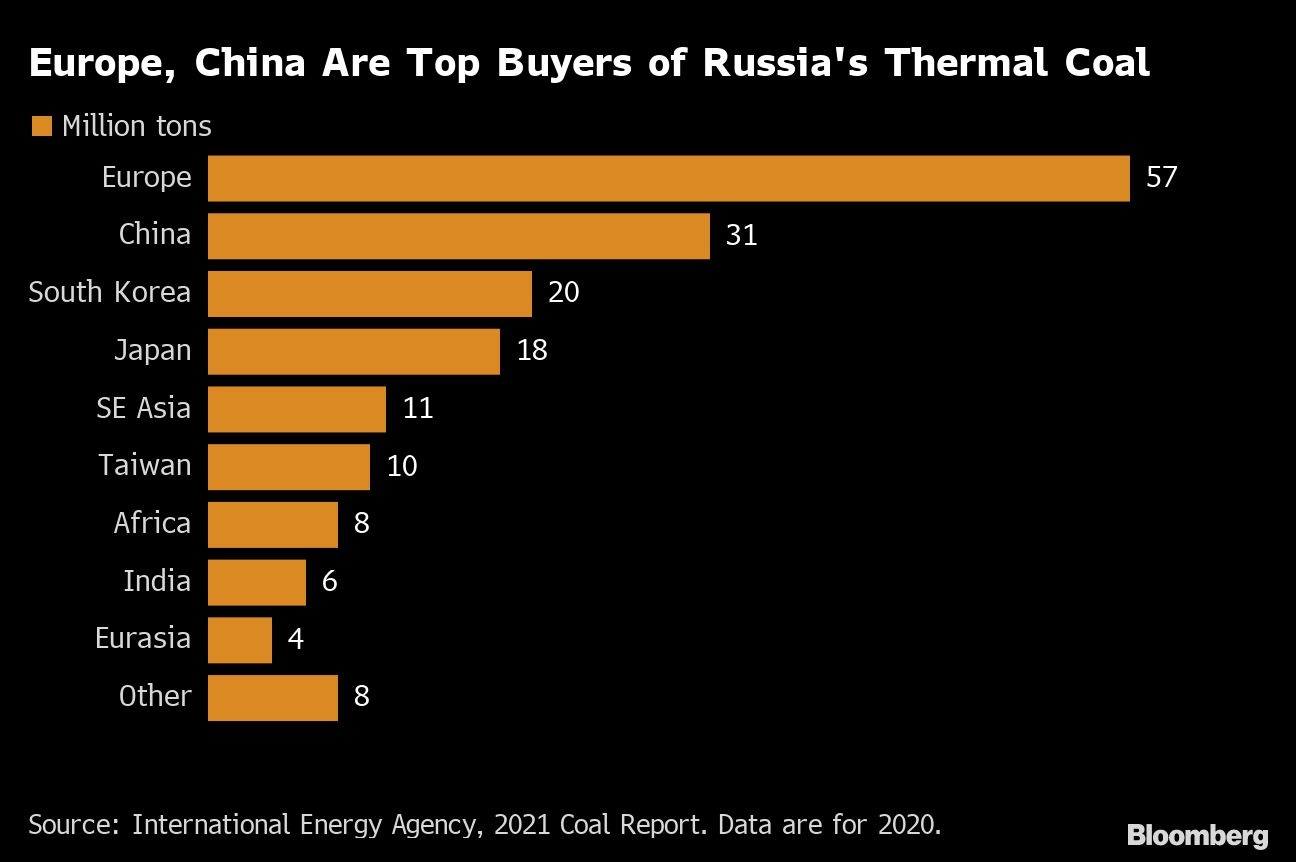 As part of the same proposal, the EU aims to expand export controls on more technologies used in the defense sector and other key industries, as well as restrictions on sales of LNG equipment. The EU’s executive arm is also proposing to add dozens more people and entities to its list of sanctioned individuals and companies, including banks, such as VTB Bank PJSC, that been cut off from the SWIFT global payments messaging system but are not yet fully sanctioned.

“We are targeting the Kremlin, the political and economic elites supporting Putin’s war in Ukraine,” Josep Borrell, the EU’s foreign policy chief, said in a statement Tuesday.

Von der Leyen will visit Kyiv this week to meet with Ukrainian President Volodymyr Zelenskiy in a show of support for the country. The EU also said it will help Ukraine gather evidence of potential war crimes.