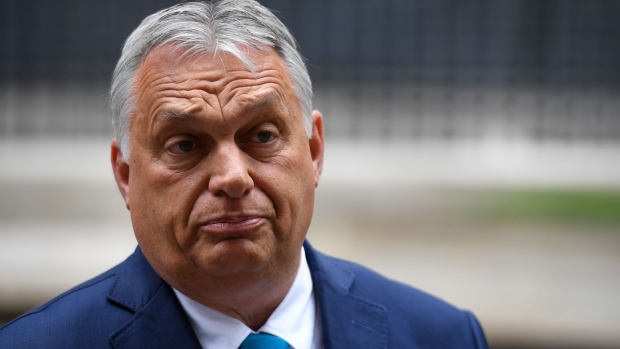 Viktor Orban, Hungary's prime minister, speaks to member of the media outside number 10 Downing Street, following his bilateral meeting with Boris Johnson, U.K. prime minister, in London, U.K., on Friday, May 28, 2021. Johnson's meeting with Orban, is one of the British leader's first in-person meetings with a European Union leader since Brexit and the coronavirus pandemic. Photographer: Chris J. Ratcliffe/Bloomberg , Bloomberg

(Bloomberg) -- The European Union is proposing to further extend a deadline for its verdict on Hungary’s recovery plan to the end of September, as tensions continue to escalate between Budapest and the bloc.

“The assessment of the recovery and resilience plan is ongoing, and indeed the commission has proposed to Hungarian authorities to extend the assessment deadline,” EU economy commissioner Valdis Dombrovskis told reporters on Monday.

Hungarian Prime Minister Viktor Orban is coming under increasing fire from the EU as he prepares for parliamentary elections next year.

The European Commission has already delayed approval of Hungary’s recovery plan, saying it doesn’t go far enough in combating corruption and potentially risking the timely arrival of billions of euros in funding. Separately, the commission has also launched legal action against legislation in Hungary that expands a crackdown of LGBTQ rights.

A spokesperson for the Hungarian government did not immediately reply to a request for comment.

Asked whether Orban could press on and pay for measures in the country’s recovery plan with national funds and seek money from Brussels afterward, Dombrovskis said that “first of all, of course, the plan needs to be approved” to help confidence that these measures will be financed by the recovery plan.

Both Hungary and Poland were singled out in a commission report earlier this month pointing to the widening chasm between the duo’s populist regimes and the bloc’s democratic standards. The two nations remain a cause of “serious concern” after a swathe of new rules curtailed the independence of courts and judges, according to the report on the “rule of law” across the 27-nation bloc.

The document added to the clamor for the commission to quickly start using recently won sanctioning powers to freeze funding including Covid-19 bailouts for errant member states.

The EU could start punishing rule-of-law offenders this year by using a so-called conditionality mechanism to freeze funds from its pandemic stimulus package before they’ve been disbursed. Hungary’s government could potentially miss out on as much as 7.2 billion euros ($8.5 billion) of grants from the EU recovery plan.