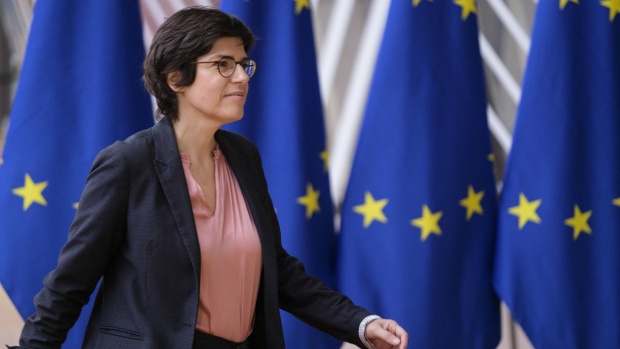 BRUSSELS, BELGIUM - SEPTEMBER 9: Belgium Energy Minister Christinne Liesbeth Alfons (Tinne) Van der Straeten talks to media prior to an extraordinary EU Energy Ministers meeting in the Europa, the EU Council headquarter on September 9, 2022 in Brussels, Belgium. EU energy ministers will hold exchanges of views on possible emergency measures to mitigate high energy prices, then they will present the state of play of the preparedness of their country for next winter. (Photo by Thierry Monasse/Getty Images) , Photographer: Thierry Monasse/Getty Images Europe

(Bloomberg) -- The European Union paused efforts to approve a package of emergency measures to curb the fallout from high natural gas prices as member states struggled to resolve a deep split over a push to cap the cost of gas.

Energy ministers holding an extraordinary meeting in Brussels agreed on the content of several emergency measures, but will delay formal approval until mid-December, EU energy chief Kadri Simson told reporters, with a group of countries pushing to toughen the price-cap plan.

“Ministers reached a political agreement,” Simson said after the meeting on Thursday, adding that she hoped a formal accord could be clinched in the coming weeks. “There is still one piece missing -- a tool to address price spikes.”

Sikela downplayed the delay, saying that “we’re not opening the champagne yet, but putting the bottle in the fridge.”

“There are simply different views on how the cap should work and how deep basically the intervention should go,” he said.

The stakes are high: Failure to reach a deal sends a signal that the EU’s united response to the war-driven energy crisis is falling apart -- a political gift for Moscow that Europe is keen to avoid.

In the background, another fight still festers: The bloc is bitterly divided about how to implement a Group of Seven-led plan to curb Russia’s oil revenues. EU diplomats failed to reach an accord after deliberations ran late into Wednesday night, and talks planned for Thursday were delayed.

The commission had come up with a proposal to cap the price of gas this week after repeated calls from a large group of member states -- even amid concerns from other quarters that the move could endanger supply. The proposed emergency brake level of €275 per megawatt-hour is well above current levels, raising the question if it will ever be used, and has complicated Thursday’s meeting.

In the days leading up to the gathering, Spain had derided the price-cap plan as a “mockery,” and France said the conditions were extreme.

“In line with what EU leaders agreed at their last meeting, we have to set some kind of a dynamic corridor, a price ceiling,” Slovenian Infrastructure Minister Bojan Kumar told Bloomberg News, adding that the price should be set around €150.

The package discussed on Thursday includes:

Separately, the European Commission set an intermediate target for use of gas in storage sites this the winter. By Feb. 1, the bloc’s inventories should be at least 45% full even after high-demand winter months, to avoid depletion by the end of the winter season. If the winter is mild, the goal is to leave storage levels at 55% by then.

(Updates with Simson quote in the third paragraph.)