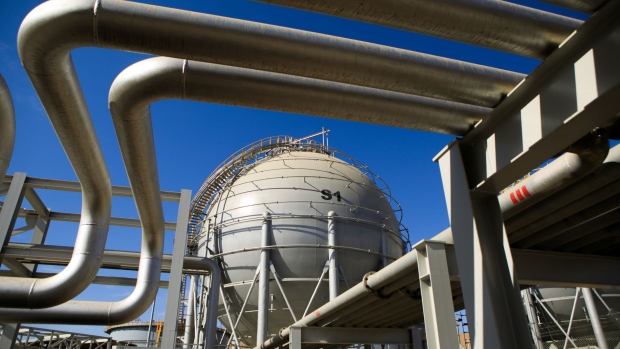 Storage sphere tanks for liquefied natural gas (LNG) sit near transfer pipes at Aqaba port, operated by Aqaba Development Corp., in Aqaba, Jordan, on Wednesday, April 11, 2018. Both the LNG and the liquefied petroleum gas (LPG) terminals were developed to secure the supply of gas resources after the disruption in Egyptian natural gas imports in 2010. Photographer: Annie Sakkab/Bloomberg , Bloomberg

(Bloomberg) -- European Union lawmakers and countries reached a deal to set a minimum natural-gas storage level before winter, as the bloc tries to avoid an energy crunch resulting from a potential halt in Russian supplies.

The two sides agreed with the European Commission’s proposal to set a minimum storage level of 80% before Nov. 1, increasing to 90% for subsequent winters. In addition, member states without storage facilities will need to ensure that at least 15% of their average consumption in the last five years is stored in another EU country.

The measures come in the wake of a turbulent winter for the EU. Even before Russia’s invasion of Ukraine sent European gas futures to record levels earlier this year, prices were elevated as storage levels had dropped to historic lows. The bloc wants to make sure that doesn’t happen again.

Operators will have to abide by the new regulation or risk losing certification and control over underground storage facilities. Russian energy giant Gazprom PJSC was criticized for not filling up its EU facilities last winter. By November, member states will have to publish their draft decisions on which operators have received certification.

“We will crack down on operators who endanger our security of supply,” Cristian Busoi, chair of the industry and energy committee in the EU Parliament, said in a statement. “European citizens will have enough gas next winter, and will be protected from those who seek to use energy supplies as a weapon.”

The bloc is also moving forward with a 210-billion-euro ($221 billion) plan to cut its reliance on top-supplier Russia by as much as two-thirds this year, by scaling up renewables and seeking alternative fossil fuel supplies.

Dutch front-month gas, the European benchmark, was 3.8% lower at 90.95 euros per megawatt-hour by 1:13 p.m. in Amsterdam. High levels of liquefied natural gas imports are helping to replenish stockpiles and easing concerns over supply.